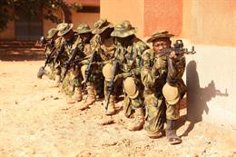 The president of Nigeria, Muhammadu Buhari, has condemned the murder of a Catholic priest who had been kidnapped in the state of Kaduna (north) and has stressed that the increase in attacks against civilians “is a matter of serious concern” for the authorities of the African country.

“I am deeply affected by the murder of this revered religious figure by criminals who seem dedicated to creating chaos and disorder in the country,” the president said, according to his spokesman, Garba Shehu. Thus, he has stressed his “firm commitment” to the fight against armed gangs in order to guarantee security in the country.

“I have always considered it a must to regularly convene security chiefs to discuss these challenges and how to move forward. I will not allow security chiefs to rest unless we find an effective solution to this worrying security situation,” he said. underlined, as reported by the Nigerian newspaper ‘The Guardian’.

In this sense, he has emphasized that the authorities “are determined to crush the enemies of humanity with all existing resources”, while he has transferred his condolences to the family of the deceased, John Mark Cheitnum, and to the Christian Association from Nigeria in Kaduna.

Since May, a dozen Christian clerics — most of them Catholic — have been kidnapped by gunmen across Nigeria and at least three of them have been killed by their captors.

Insecurity in Nigeria, previously centered in the northeast of the country, has spread in recent months to other areas in the north and northwest, raising alarms about the possible expansion of these terrorist and criminal networks.