Nigeria, the most populous country on the African continent with 200 million inhabitants, will carry out its first national census in 17 years between the end of March and the beginning of April, a key count to estimate, for example, the distribution of the large oil benefits between the more than 300 ethnic communities that live in the 36 states of the country.

In its announcement this Saturday, the National Population Commission has assured citizens that there will be “no room for manipulation” thanks to the use of new counting technologies, in the words of its president, Nasir Isa Kwarra.

Despite the fact that the authorities have given themselves only five days to carry out the census, the use of new satellite positioning systems will allow for a count that is as accurate as possible.

“In theory and in practice it will be the same as other censuses,” Kwarra said, “but we are going to use state-of-the-art technology, and no one will be able to manipulate the resulting figure, because we are not going to count anyone twice,” he said in press conference picked up by the Arise television channel.

“We intend to be transparent, fast and verifiable,” he added before recalling that the authorities have already completed the initial procedures for the demarcation of areas for the development of the firm census between March 29 and April 2, approximately one month after the presidential elections.

Nigeria will thus hold a recount initially scheduled for 2021 and which ended up being postponed due to the enormous insecurity caused by criminal groups operating in the country, the so-called “bandits”, whose practices of kidnapping, extortion and murder have terrorized the population of localities remote.

United Nations estimates suggest that more than 400 million people could live in Nigeria by 2050, which would make the African country the third most populous in the world, ahead even of the United States. 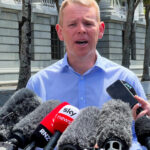