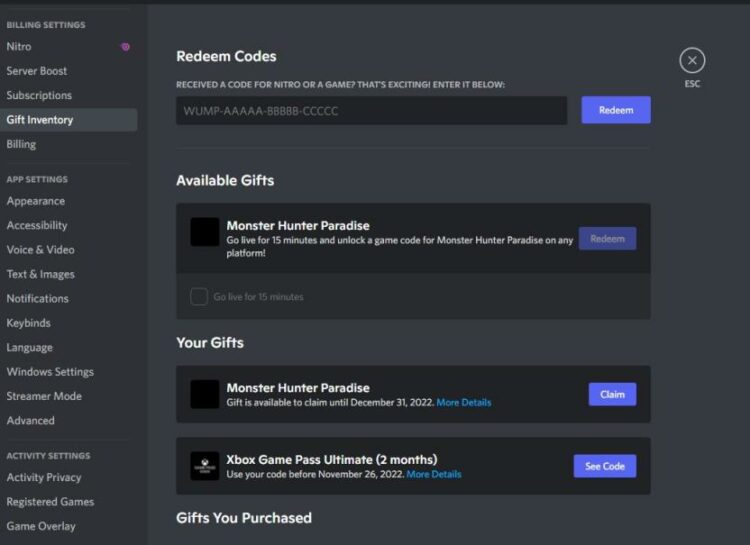 monster hunter is one of Capcom’s most successful franchises, so fans are excited for what’s to come after monster hunter rise and all that it implied monster hunter world. The followers of the saga are intrigued by an alleged leak about the next game that the company is preparing.

The clue comes from an unexpected place: Discord. A user of the platform found a reference to something called monster hunter paradise, a project that has not been announced or mentioned by Capcom. So the community has put hands to work to find out what it is.

Discord may have leaked a new monster hunter

The Twitter user known as Naga shared some interesting screenshots this morning that caught the attention of gamers. They show the Discord interface, specifically the gift inventory. There you can see a message to get a code monster hunter paradise.

Various users have had access to the message and have been able to confirm that it is possible to choose a code for PlayStation and Xbox. Naga even shared a video showing how to view the message after a few simple steps.

Players try to find out what it is, as they have no idea if it will be the next main installment in the series, a new spin-off or a simpler free-to-play project. Many believe that it will be the sequel to World or the project mentioned in the Nvidia leak.

As of this writing, Capcom has not commented on the leak or hinted at a title called monster hunter paradise. Therefore, we recommend that you take this information as a simple rumor.

When talking about rage i was referencing a convo we had together
He doesn’t have insider info and i just missworded it
Deleting it just to avoid missunderstandings on that point
(Edited screenshot for posterity) pic.twitter.com/uMS6CqMGBk

Heres said tutorial since i got asked about ithttps://t.co/mi7MmoJCH5

In case you missed it: promote monster hunter rise in Japan in a strange and catchy way

In this link you can find all the news related to monster hunter.

Related video: monster hunter risethe next step in the evolution of the hunter