This is revealed by a study by the International Campaign for Tibet. Those over the age of 60 are the most vulnerable. The peak of infections is expected during these holidays for the Lunar New Year. The estimated figure for Tibet is “conservative.” More transparency is needed on the part of the authorities. Discrimination in the supply of vaccines.

Beijing () – More than 220,000 Tibetans over the age of 60 could die this year from Covid-19. This is a projection contained in a report published in recent days by the humanitarian organization International Campaign for Tibet.

Following Xi Jinping’s sudden cancellation of “Zero Covid” policy in early December, the World Health Organization expressed concern about the spread of the virus in China’s outlying areas during the Lunar New Year holiday, which falls celebrate today. In the last week, millions of citizens traveled to join their families in the rural areas of the country, less equipped in terms of health.

Studies by domestic and foreign research institutes estimate that more than 1.6 million Chinese could die from the lung disease in 2023. Precise data on the course of the epidemic curve are currently lacking: as was also the case when the pandemic broke out in late 2019, the authorities provide little information.

The International Campaign for Tibet claims that the estimate presented is “conservative”, and that the actual number of victims cannot be known without more transparency on the part of the Chinese government.

According to Radio Free Asia, the authorities’ decision to reopen after the riots in late November led to a rapid increase in Covid deaths in the Tibet Autonomous Region. Most of them are the elderly and people with previous illnesses.

Official statistics show that there are about 693,000 Tibetans over the age of 60 and 82,700 over the age of 80. The International Campaign for Tibet claims that the deaths recorded so far are also the result of discriminatory acts against the Tibetan community. The sources revealed to the humanitarian group that the authorities would have excluded the oldest Tibetan residents from the third vaccination dose in early 2022. 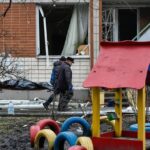