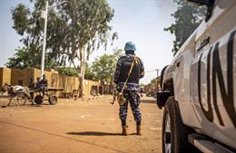 The Government of Mali announced this Wednesday the expulsion of the spokesman for the United Nations Multidimensional Integrated Stabilization Mission in Mali (MINUSMA), Olivier Salgado, who must now leave the country within 72 hours.

This has been confirmed in a statement by the Malian Ministry of Foreign Affairs, which links the decision to “the series of tendentious and unacceptable publications” by Salgado on his social networks regarding the controversial arrest of 49 Ivorian soldiers at the capital’s airport. Malian, Bamako.

According to the diplomatic portfolio, Salgado has declared “without any evidence” that the Malian authorities “would have been informed in advance of the arrival of the 49 Ivorian soldiers on a civilian flight,” according to the Radio France Internationale radio station.

Despite the expulsion of the spokesperson, Mali has stressed its willingness to maintain dialogue and deepen cooperation “with all international partners”, including MINUSMA itself.

The transitional government of Mali reported in the middle of the month of the arrest of 49 Ivorian soldiers who arrived in the country on two planes. As detailed, the almost fifty soldiers “were illegally in Malian national territory.”

Given this controversy, Salgado said on Twitter that the detained soldiers “were not part of one of the MINUSMA contingents.”

Amid the withdrawal of French and Western troops due to tensions with the Malian military junta, at the end of June the United Nations Security Council approved a one-year extension of MINUSMA’s mandate in Mali until June 30, 2023 .

The extension of MINUSMA’s mandate comes after France and its allies announced in February the troops deployed in the framework of the ‘Barkhane’ operation and the Takuba Force, sent to Mali to help Bamako in the fight against jihadism, in the face of tensions with the military junta in the African country.

Tensions have been on the rise in recent months due to the military junta’s announcement of lengthening the transition process and the alleged deployment of mercenaries from the Wagner Group, something that has been denied by Bamako and Moscow, which speak of regular military cooperation .

The transitional government has admitted the presence of Russian military instructors in the country, under a mandate similar to the one granted to the European Union training mission, amid Western suspicions about the increase in Russian influence in Africa.

"In summer, save gas for winter": the invitation of the European Commission to its citizens