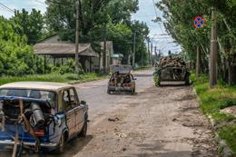 The Malian Army has denounced this Wednesday a series of attacks by unidentified armed persons against military bases, without at the moment there being information about possible victims or claim of responsibility.

Likewise, he has highlighted on his account on the social network Twitter that “infiltration attempts by terrorists have also affected a checkpoint in the Hamadoun BOcary Barry camp and the city of the Air Force in Sevaré”.

The Armed Forces have highlighted that the military “have responded to all suspicious movements” and have pointed out that they will soon provide more information on these incidents.

The attacks have been perpetrated just a few days after the attack carried out on Friday against the main military base in Mali, located on the outskirts of the capital, Bamako, which left one dead and whose authorship was claimed by the Al Qaeda affiliate in the country, the Support Group for Islam and Muslims (JNIM).

Mali, like other countries in the Sahel, has been registering in recent years a growing number of jihadist attacks carried out by both the Al Qaeda affiliate in the region and the Islamic State, which has also increased inter-community violence and caused the displacement of tens of thousands of people.

AMD launches its noise suppressor for microphones in its latest drivers: this is how it works