The German Chancellor, Olaf Scholz, and the French President, Emmanuel Macron, have insisted this Friday that in order to build a “strong” Europe it is necessary to invest more in the Armed Forces, as well as in the European defense industry.

On the eve of the celebration of the 60th anniversary of the Franco-German ties repair treaty and of the ministerial meeting in Paris on Sunday, both have defended this idea in an article published in the German newspaper ‘Frankfurter Allgemeine Zeitung’.

“We will strongly advocate an ambitious strategy to promote the competitiveness of European industry and a European environment that fosters competition and innovation,” said Scholz and Macron.

Likewise, they have indicated that it is essential that an “enlarged” European Union, in reference to the open processes of access to the club, must continue to be “capable of acting with more efficient institutions and faster decision-making processes”, in particular with the extension of qualified majority voting in the Council.

This article was published on the same day that the German government did not unblock the supply of battle tanks in Ukraine within the framework of the meeting of the countries of the Contact Group for Ukraine at the Ramstein military base in Germany .

The supply of tanks has focused international attention in recent days, as Berlin has it in its power to authorize the re-export of the tanks to Ukraine, as Poland and the Baltics have requested.

Apart from sending tanks to kyiv, Macron and Scholz have had disagreements in recent years and, although both have the objective of strengthening European capabilities, there is still no real progress in joint weapons projects.

In fact, Germany seeks to implement a better European air defense system in collaboration with 14 other countries, including France, because, according to what they say from Berlin, there is fear of a possible arms race. 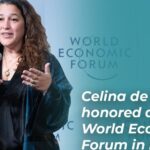