The Lockheed Martin company has announced this Wednesday that it will increase the production of F-16 fighters in view of the possible supply of combat aircraft to kyiv in the framework of the next military meeting of the Ukrainian Defense Contact Group (UDCG), known as ‘ Ramstein’ format, to be held in February.

The director of operations of the company, Frank John, in an interview with the newspaper ‘Financial Times’ which has also been echoed by the TASS news agency, has assured that production in Greenville, South Carolina, will increase with the objective of replenishing stocks in the event that a country chooses to transfer its fighters to a third party.

The UDCG meeting will deal specifically with the supply of combat aircraft to Ukraine. Ukrainian Defense Minister Oleksei Reznikov has already acknowledged this Wednesday that Western combat aircraft are the next item on his “wish list” once Germany has unlocked the supply of Leopard main battle tanks.

For his part, the Ukrainian Foreign Minister, Dimitro Kuleba, also pointed out this Wednesday that the international community has “new tasks ahead” that include the supply of Western combat aircraft, new sanctions and the implementation of the Formula Peace raised by kyiv. 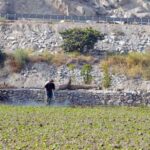