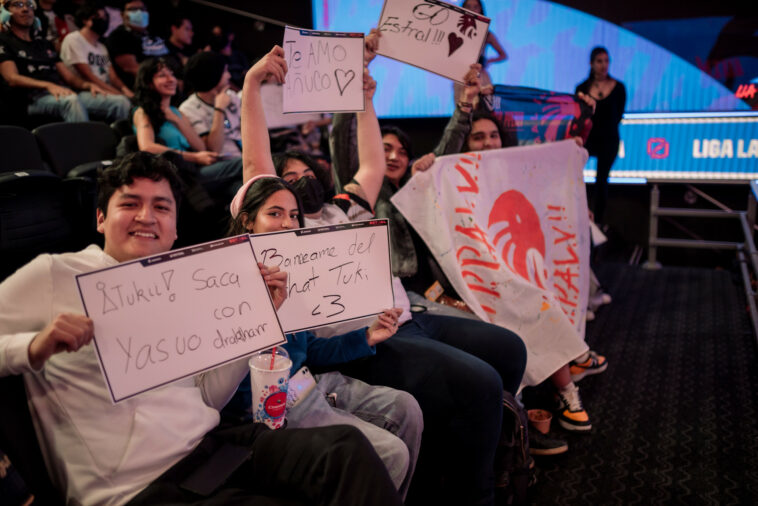 After several months since that mythical duel in GAMERGY Mexico, the activity of the Latin American League of League of Legends finally returned to the Arena Esports Stadium in Artz Pedregal, with everything ready to start a season full of new challenges.

With 6 teams ready for combat and 2 rookie squads from the Division of Honor, the 2023 Opening split is preparing to be one of the most competitive in recent years.

And it is that in addition to the large number of changes in each of the main rosters during the preseason, the maximum circuit of LoL Esports in the region launches a new format in which each game will be important, so the slightest error could define the pass to playoffs.

As is the tradition for several seasons, this new cycle of the LLA opened with the same confrontation that took place in the last final, bringing us the reigning champion Isurus against the 3-time finalist of the league, Estral Esports.

Looking ahead to this first series of the tournament, the eagle squad arrived as the favorite given the incorporation of players like Brandon “Josedeodo” Villegas and Lee “SamD” Jae-hoon after passing through the LCS and LCK, respectively.

On the other hand, Isurus had a lot to prove by completing his roster with the base of the Clausura 2022, in addition to introducing the Argentines Andrés “Pan” Bonilla and Lucas “Kaze” Fe, after the departure of Kang “ADD” Geon-mo and Ali “Seiya” Bracamontes.

The first game of the day had a fairly quiet start, where what stood out the most was Jesús “Grell” Loya’s first blood against Josedeodo, which ignited the atmosphere between both teams. It took Estral a couple of minutes to even them out, and all would remain calm until the 12th minute, when in a bot lane chase, SamD and Facundo “Shadow” Cuello would show their power by picking up a third of masterful kills.

With the resources in his favor, Estral continued his online pressure and started his rotations safely, while Isurus tried to hook his opponents to finish them off. However, the eagle quickly took flight by getting more towers and dragons, which would lead to a moment of despair for the shark where they would all end up separated, giving Estral the first kill of the split.

Despite the fact that Estral was slow to close the game, their advantage never got out of hand and grew with each passing minute, until they blew up the enemy nexus with more than 16 thousand gold difference at 28 minutes.

The second best-of-3 game got off to a slow start, though Estral gained a slight lead by eliminating the first 2 elemental dragons. Isurus would try to counter this with a Herald on his hands, but it would only be enough to lightly damage the bot lane tower.

Isurus took advantage of this small distraction to start attacking the dragon, something that Estral quickly realized and with enormous pressure, they finished off the target and most of the shark except for Omar “Gavotto” Gavotto. Here, the Mexican marksman came out and drove everyone back with his mighty Zeri, taking Emmanuel “Acce” Juárez along the way and letting Ji “Takeover” Hyeun-min escape with low health.

At the 23rd minute, SamD would hit back by picking up another kill in his pocket, allowing Estral to secure Alma Quimtech and Baron Nashor. After this, Estral only needed one more kill to push his way through the mid lane, to take down the Isurus nexus again and claim his first points in this finals rematch.

In case you missed it: Legendary! This is how the Riot Games Lunar Festival was lived in Mexico City

For the next duel it was the turn of INFINITY and Team Aze to show their new signings, among which the addition of Korean players for the first time to the infinity squad stood out.

While on the cards side, they brought players like Lee “Parang” Sang-won, Ignacio “IgnaVilu” Viluron and Lucas “Froststrike” Espíndola to their main roster, in addition to being impacted by the absence of Juan “Dimitry Hernandez due to visa issues.

Following the trend, both squads played passively for the first 10 minutes, having only a couple of exchanges around the river pits. The real action would not come until the 17th minute, when Team Aze took advantage of their vision of the dragon to take it and, incidentally, get one more kill in favor of Froststrike.

The card jungler would use this advantage to ensure a no-hassle Herald, which would wreak a lot of havoc in the mid lane to everyone’s surprise. INFINITY would respond shortly thereafter by taking down the bot lane tower, keeping the gold gap relatively close.

After 20 minutes, we got to see a few more trades looking for both the dragon and the Baron buff, which would end up falling into the hands of INFINITY. Using this extra pressure, they pushed little by little towards the base of Team Aze in such a way that they forced a final fight, with which the infinite was able to close the game close to 35 minutes.

.@Infinitye_sport Blow up the enemy base to take the first game. #LLA pic.twitter.com/RyOs1eGDq5

INFINITY made their way through the second game in the series without issue, taking control of the jungle and dragon pit while picking up several kills along the way. Even with this aggressiveness, Team Aze was not far behind and showed some initiative by staying with the Harbinger, which ended up taking the mid lane turret.

The cards would dare to go further by trying to remove their first dragon, until at minute 18, Park “5kid” Jeong-hyeon would make a classic championship play and steal the target with a powerful arrow from his Varus. This ended up unbalancing all of Team Aze in a few minutes, since their rivals did not take long to enter their base using the momentum in their favor and the improvement of the Baron.

After 30 minutes, INFINITY had completely wiped out all hope for Team Aze, and with every possible advantage coming from the jungle monsters, they closed out their first series of the year with a resounding 2-0 defeat of the 2022 Apertura champion.

To close this first week of the Apertura 2023, 2 great clashes await us in which we will see Six Karma and The Kings make their debut against each other in the Latin American League, as well as Movistar R7 and All Knights debut their new lineups with which they hope to overcome their results from last season.

But tell us, what did you think of this first date of the LLA 2023? Which team do you see as the best contender for the next rounds? Tell us in the comments.

League of Legends is available for PC and Mac. Follow this link to see more news related to this MOBA. On the other hand, here you will find all our coverage on the world of esports.

Related video: The most anticipated video games of January 2023