lawyers and journalists concerned about new threats to the media 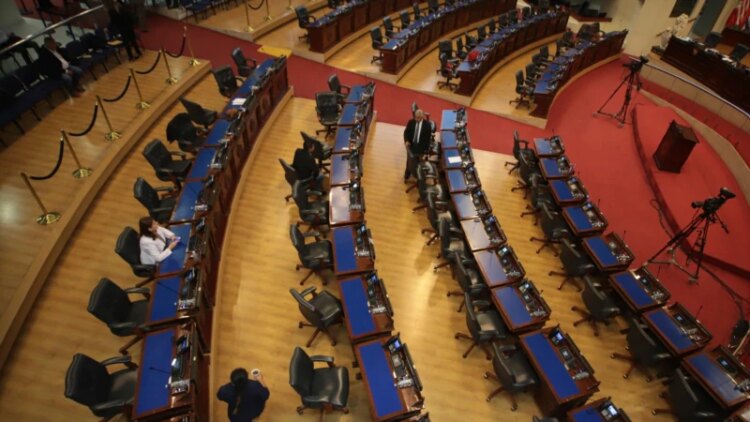 Threats to the media in El Salvador are becoming more acute, according to lawyers and journalists consulted by the voice of america. In addition to the criminal reforms that can put journalists who publish messages alluding to gangs in jail, the official discourse claims to have the power to close media outlets if they wanted.

The legislator, who was sanctioned by the United States government after being included in the list of corrupt and anti-democratic agents, better known as the Engel List, compared the situation in El Salvador with that in Nicaragua, a country where the Daniel Ortega regime has closed dozens of independent media, and said that the Salvadoran Congress has not promoted laws of this nature, although it could.

The voice of america sought to expand the statements of the head of the New Ideas caucus with the press office of Congress, but until now the process is still on hold.

The editor and founder of the communication outlet Gato Encerrado, Ezequiel Barrera, said that the legislator, far from trying to promote laws of this nature, what he seeks is to “use his position as an official with power to intimidate journalists and media outlets that are critical of the can”.

“We at Gato Encerrado are concerned about these types of statements because they only show that the central government and its Legislative Assembly do not tolerate freedom of the press and instead of creating the conditions to practice journalism in El Salvador, what they do is attack, threaten and intimidate,” he told the Voice of America.

According to the journalist, the head of the New Ideas party caucus does have the power to promote a law that closes media outlets, but “deep down this law would be nonsense.”

The legislator explained that his statements occur in a context in which as a deputy, the law empowers him to have “a power of initiative (of law)”, and just as he can have that initiative with any other law, he can also have it to sanction any media outlet, something he “would never do,” he added in the same interview.

However, journalist Sergio Arauz, from El Faro, is of the opinion that the main decisions are made from the presidency of Nayib Bukele and his circle of influence. Which means that if the order to close media does not come from the Executive, the creation of a law of this nature would not advance.

“In bukelismo (reference to the circle of officials close to the president) there is ample history of anti-press actions, gag laws. I believe that the words of the deputy of Nuevas Ideas express a desire that he cannot achieve, ”added Arauz to the Voice of America.

In his opinion, on the night of May 1, 2021, when the new Assembly related to the Bukele government began its functions, that power and the Judicial power replaced that day, are subject to the Executive power.

Some media such as El Faro, Gato Encerrado, El Diario de Hoy, Revista Factum, among others, have published investigations on alleged negotiations between the government of Nayib Bukele and Salvadoran gangs. In addition to irregular purchases during the COVID-19 pandemic.

These publications have brought them accusations from Salvadoran officials who assure that the publications only promote “misinformation.” For this reason, the Assembly has promoted penal reforms to limit some coverage issues, such as that related to gangs.

Is it legal to close media?

In a context of respect for the rule of law, closing media outlets in El Salvador is impossible, said Wilson Sandoval, lawyer and coordinator of the El Salvador Anti-Corruption Legal Advisory Center (ALAC), an office that is part of the National Foundation for the Development (FUNDE).

But, since the Salvadoran Congress dismissed the magistrates of the Supreme Court of Justice and the Attorney General on May 1, 2021, the rule of law in El Salvador has been broken, added the lawyer, and in that context everything is possible.

The consequences of these threats, in the short term, can go two ways, added the lawyer. One is that the Salvadoran media self-censor to avoid conflicts with the Salvadoran state and another is that citizens are gradually left without diverse sources of information due to the same self-censorship.

“The words of Congressman Guevara go hand in hand with the normative products that the Legislative Assembly has generated, products that seek to persecute, penalize or punish the journalistic exercise,” added Sandoval.

In April, Salvadoran legislators approved punishing those who create or reproduce “messages, denominations or propaganda alluding to gangs” in the Central American country with up to 15 years in prison.

The measure proposed by President Bukele and the Ministry of Security covers media that publish texts, images, graffiti or any other form of visual expression related to gangs.

Apart from these reforms that punish journalists with prison terms, El Salvador is keeping in suspense a bill called the “Foreign Agents Law” that seeks to ensure that civil organizations and the media that receive funds from foreign cooperation pay a 40% tax for donations received.

Despite the fact that the Law has been rejected by the United Nations, the Inter-American Commission on Human Rights (IACHR), the Committee to Protect Journalists (CPJ) and the Inter-American Press Association (IAPA), among others, the government of El Salvador He justifies his initiative by saying that it will serve to prevent international interference in internal political affairs through the media.

For criminal lawyer Marcela Galeas, the legislator’s statements regarding the closure of the media constitutes a threat that, “in addition to configuring an excess of his powers as a deputy, is arbitrarily restricting a constitutional guarantee.”

“(The statements) contribute to the stigmatization and disinformation of society, also violating civic space because it restricts the exchange of opinions that are so necessary for the harmony and democracy of a country,” he concluded in an interview with the Voice of America.