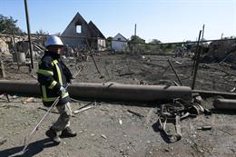 The Russian Foreign Minister, Sergei Lavrov, visited Egypt this Sunday and met with the country’s president, Abdelfatá al Sisi, in a new act of the campaign to break Russia’s image of international isolation in the midst of the war in Ukraine.

“Russia’s foreign minister’s tour of African states kicks off with his visit to this friendly country as American diplomacy runs from house to house to various countries pleading — hold your laugh — not to take photos with Lavrov to avoid that Russia uses them as proof that it is not isolated,” argued Russian Foreign Ministry spokeswoman Maria Zajarova.

According to Zajarova, “our American ‘partners’ do not realize that instead of photographs, we use the stupidity, arrogance and complete lack of sense of reality of the top US officials.”

In addition, he has reproached Washington for the decision to classify Russia among the countries in which United States citizens run the risk of being “detained without reason” which for Zajarova has an “illegal character”.

Lavrov has met in Cairo with Al Sisi and also with the Egyptian Foreign Minister, Samé Shukri. The Egyptian Ministry of Foreign Affairs has stressed that both parties have discussed bilateral cooperation and have “exchanged views on regional and international issues.”