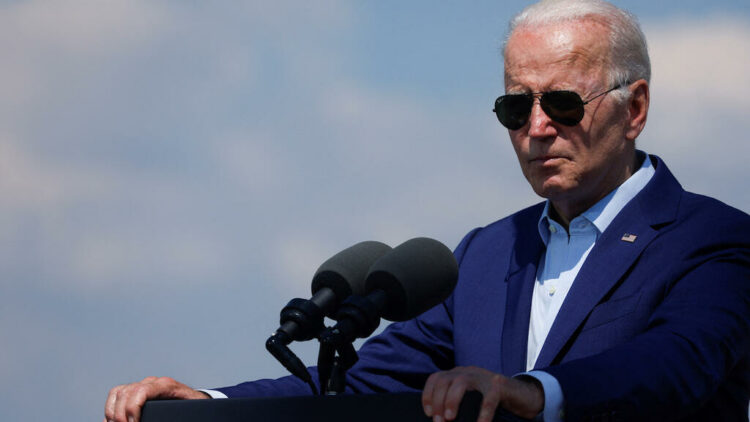 The US president, who has just suffered a parliamentary setback over his environmental reform program, announced new regulatory measures to protect regions facing heat and boost wind energy production. However, he did not declare a “state of climate emergency”.

Paralyzed in Congress and limited by the Supreme Court, Joe Biden tried, however, on Wednesday, July 20, to revive his climate promises by announcing new regulatory measures.

Climate change is “a clear and present danger” and an “existential threat to our nation and the world,” the US president said. “The health of our citizens is at stake,” as well as “our national security” and “our economy,” he added, during a visit to the site of a former coal-fired power plant in the state of Massachusetts, closed since 2017 and in process. conversion to wind power.

“If we don’t limit (warming) to less than 1.5 degrees, we will lose everything. There will be no going back,” the president said.

“Since Congress doesn’t do what it should,” lamented the 79-year-old Democrat, who has just suffered a major congressional setback over his environmental reform program, “I will use my executive powers.”

As Biden spoke, large parts of Europe were sweltering from the heat wave, and the United States was not spared: Some 100 million people in the United States currently live in areas affected by excessive heat alerts.

Funds for communities to adapt to climate change

Specifically, the federal agency in charge of dealing with natural disasters and other emergencies, FEMA, will allocate 2,300 million dollars to help local communities adapt to climate change and its consequences (heat waves, droughts, floods, etc. ).

The federal government also wants to support disadvantaged households and less affluent housing areas that do not have access to air conditioning, for example by helping some families pay their electricity bills.

Finally, the Biden Administration will allow the installation of wind capacity in the Gulf of Mexico, which could supply electricity to up to three million homes.

But the president has not declared – at least not yet – a “climate state of emergency”, as some of his party’s elected officials are calling for, a measure whose impact is unclear but which could give him more political power. But the White House stresses that declaring a state of climate emergency remains an option.

The limits of Joe Biden’s power

The White House says it is determined to meet its climate commitments, including reducing greenhouse gas emissions.

Joe Biden, who returned to the Paris climate agreement abandoned by his predecessor Donald Trump, announced in April 2021 that the United States would reduce its greenhouse gas emissions by 50-52% by 2030, compared to 2005.

But the US president is once again experiencing the limits of his power in environmental matters: he does not have a clear majority in Congress and the judiciary is against him.

His climate agenda took a hit when Democratic Senator Joe Manchin, whose vote is crucial, said he would not support legislation to switch the US economy to clean energy sources, which would likely doom it.

And Joe Biden is facing a Supreme Court that has become fiercely conservative and deeply hostile to centralized regulation, having just severely limited the powers of the federal government in the fight against global warming.

*With AFP; adapted from its original French version