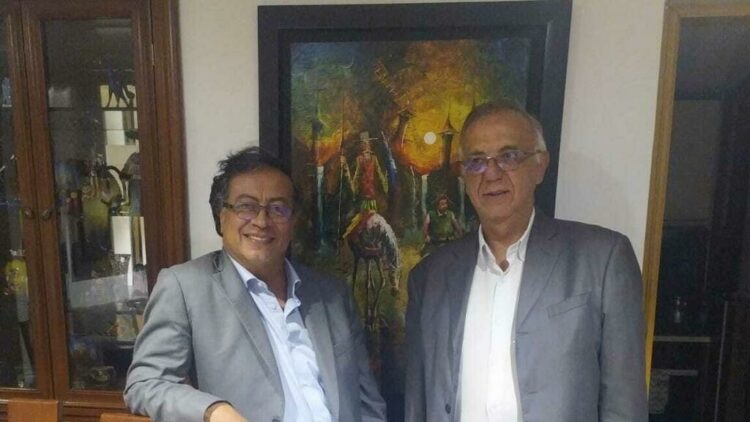 The conformation of the new ministerial cabinet of the Colombian president, Gustavo Petro, is a box of surprises This time it was the announcement of the prestigious investigator and ex-magistrate of the Supreme Court Iván Velásquez as Minister of Defense. Petro and Velázquez share a history that goes back to the government of Álvaro Uribe: the denunciation and investigation of the criminal network woven between politicians, economic powers, the military and drug trafficking mafias: “parapolitics”.

At the beginning of his term as Senator in 2006, Gustavo Petro denounced the establishment of a mafia state in Colombia, the result of the pact between politicians and drug traffickers with the collusion of military commanders: “parapolitics.” It was Iván Velázquez who, as head of investigations of the Supreme Court of Justice (2006-2012), led the investigations into the criminal phenomenon denounced a year earlier by then-senator Petro.

The investigations of the former magistrate uncovered the alliance between the bloody paramilitary groups and congressmen openly related to the government of then President Álvaro Uribe. As a result, some 70 legislators were convicted of the “parapolitics” scandal.

According to the lawyer and former associate judge of the Supreme Court, Ramiro Bejarano, the appointment of this honest jurist, a kind of “anti-corruption czar”, in the Defense Ministry and not in the Justice portfolio contains a clear political message. “With this appointment, Petro had the uribism that took away control of the public force, and that is a very important political gesture […] Iván Velásquez has the virtue that, in addition to knowing the subject of justice, he has the best knowledge of organizations linked to drug trafficking, parapolitics, corruption of the military forces and, in addition, he knows how to investigate,” Bejarano told Radio France International. (RFI).

Velázquez’s discoveries during the presidency of the ultra-conservative Álvaro Uribe led him to be the target of a mega illegal telephone espionage operation, known in Colombia as “las chuzadas”. Under the order of the Uribe government, the Administrative Department of Security (DAS), the president’s secret police, intercepted the high courts, independent journalists, opponents, and human rights defenders identified by the president as being “helpers of terrorism.” Velázquez was also the victim of a judicial set-up arranged from the Government Palace in complicity with a paramilitary, alias Tasmania, who would later confess to the crime in court.

In 2020, the Colombian justice system confirmed that Velázquez had been the victim of persecution, espionage, and a state smear campaign. And the outgoing Minister of Defense, Diego Molano, apologized to the former magistrate on behalf of the Colombian State.

The new defense minister will be in charge of some 228,000 soldiers and 172,000 policemen, who make up the largest armed forces on the continent after those of Brazil. After his appointment, Velázquez thanked President Petro through his Twitter account, emphasizing that the trust offered will be reciprocated.

I thank the president @petrogustavo the very honorable designation you have given me as defense minister. I will do everything in my power to reciprocate his trust and help him build that country that we have dreamed of so much. For life, for peace, for democracy!

Velázquez will have to lead various initiatives of the new government, such as dismantling the riot squad implicated in human rights violations and reforming the promotion system of the military forces.

According to the lawyer Ramiro Bejarano “where there is more corruption is, without a doubt, in the military forces. A number of retired generals and soldiers leave the military service rich.” And the Velásquez appointment seeks to put a stop to the high military command in the management of public affairs, adds Bejarano, who played a central role in the discovery and denunciation of the judicial set-up against Iván Velázquez when he was serving as a magistrate of the Supreme Court and investigating “parapolitics”.

The appointment of the former magistrate in the Defense portfolio bothers the Democratic Center, the outgoing government party founded by Álvaro Uribe. And it is not for less, because Velázquez’s career gives proof of a frontal fight against corruption. In 2013, after leaving the Supreme Court of Colombia, he was appointed to lead the International Commission against Impunity of Guatemala (CICIG). Created by the UN, the entity accompanied, between 2007 and 2019, the justice of the Central American country in a deed to clean up the state apparatus infiltrated by the mafia.

Led by Velázquez, he uncovered a network of customs fraud that led to the resignation, arrest and trial of President Otto Pérez Molina and Vice President Roxana Baldetti.

In 2017, the Velázquez CICIG requested to remove the immunity of President Jimmy Morales (2016-2020) after suspicions of illegal financing of his campaign.

Two years later, the government of Yimmi Morales ordered the definitive expulsion of the CICIG from Guatemala and gave its officials 24 hours to leave the country.

"It casts doubt on Russia's credibility"