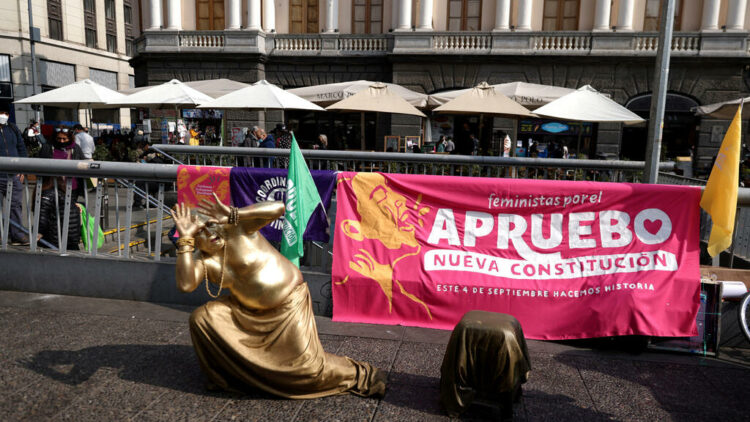 Chileans will vote in a month to decide whether to approve a new Constitution or reject it, leaving the current one in force, inherited from the dictatorship of Augusto Pinochet. Four weeks before the referendum, the “rejection” option leads the polls, with 45%. But the “approval” shows a rebound and reaches 36%, 5 points more than the previous survey, according to the latest from the Criteria pollster, known this Wednesday. The undecided reach 19%. RFI approached the Approval campaign.

August has begun and with it the countdown to the big date on which the plebiscite will be held, so there is no corner of the city that remains untouched by the big day. The Approval campaign set out to be on the streets and in the center of Santiago we found a stand with a table displaying graphic material, pins and information. Ernesto Medina, president of the citizen movement “Here the people” trusts in the rebound of the Approval.

“I think that as time goes by, the Approval has been strengthened, different massive acts have been taking place, in different communes, everyone is going out to the streets, to the fairs, therefore, obviously the Approval it goes up and has something to offer”, he explains to RFI

Medina highlights what he considers to be the strength of this constitutional proposal. “The most important reason is that it is a future, a hope for young people, to improve their living conditions and to have the rights included in the constitution and that are not included today, such as the right to water, to education. , housing, health, in short”, he assures.

Also read: Chile: One month after the plebiscite for the new Constitution, the Rejection continues with an advantage

“Here the people” is a movement that has been developing different campaigns for 25 years and although they are independent in events such as the next plebiscite, they are coordinated with other social organizations to join forces and achieve victory at the polls.

Antonia, 19, is a student of Political Science and is interested in the material offered by the stand. “I have started to tell my family about the articles, the good things and the bad things. Comparing it also with the current Constitution so that they also realize that not everything is as ugly as they paint it, that it will not ruin the country or unleash terrorism, like that campaign of terror that is carried out, how to reassure them in that aspect “, bill.

Antonia highlights the main points of the new proposal that have convinced her. “From what I’ve read, I really like the topic of water, that it cares about the environment, also about education,” she says.

Shortly after the start of the television slot, this August 5, the plebiscite is a topic present throughout the country, with citizens waiting expectantly to know whether or not they will have a new Constitution.