Israeli troops have proceeded this Sunday to the demolition of two Palestinian-owned residential buildings in the village of Artas, on the outskirts of Bethlehem, in the West Bank.

The mayor of Artas, Lutfi Asaad, explained that the Israeli military with heavy machinery was in charge of these demolitions, according to the Palestinian news agency WAFA.

These buildings were owned by Ismail Salá, a local resident who used them as a refuge for his family after the Israeli authorities demolished his house months ago.

The new Israeli government has announced that it will not allow any Palestinian construction in Area C of the West Bank, which is under full Israeli control. 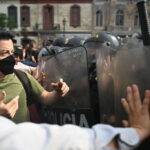