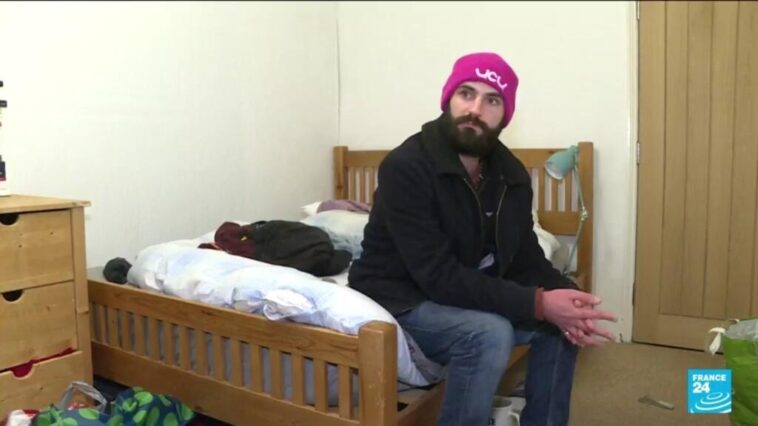 In Bristol, Iwan, a school life assistant, will have to quit his job because he can no longer earn a living from it. Another side of the country’s crisis in France 24’s series of reports on the difficulties facing the British.

Following the railway workers and civil servants, nurses and ambulance drivers went on strike in the UK on Monday 23 January. Professors will soon follow, demanding raises as inflation tops 10%.

Iwan lives in Bristol. He is a full-time school life assistant and will have to quit his job because he can no longer live off of it.

“There was an incident in class and of course there weren’t enough school staff,” says Iwan, coming home tired from his day’s work at a school on the outskirts of Bristol.

“Students started fighting, it was getting dangerous. Many of our students have autism, dyslexia and live in foster homes. It took the intervention of several teachers to calm them down,” narrates the experience.

>> See also: “The NHS paramedics, on strike in the United Kingdom to protest the lack of resources”

This school life assistant has just found a room in a shared flat. But electricity bills have gone up, as has the cost of living, and education is no longer enough.

It is not enough to live. So Iwan resigned himself to finding another better paying job and giving up his “heart’s work.”

“Right now we are all writing our resumes,” he says. “For now, we’re staying for our students. We don’t want to abandon them, they haven’t done anything wrong. They have learning difficulties or come from disadvantaged backgrounds.”

This English Literature graduate works full-time at the school. But sometimes he has to go to food banks.

“This kind of soup is usually my dinner,” he says, holding up a cheap can of food.

Many teachers have second jobs, like Iwan’s girlfriend, who has to babysit in the afternoons. For him, the public sector is lagging behind.

The Government is not interested in all those people who spend their days saving lives and caring for others, for the vulnerable,” he says. More than disappointing us, it makes us want to change countries. Many of my family have gone to Australia , New Zealand or the United States, where salaries are better.

Almost a third of teachers leave before completing five years in the profession. Schools have difficulties recruiting staff. The unions believe that the quality of teaching is at risk of drastic decline.

This article was adapted from its original in French