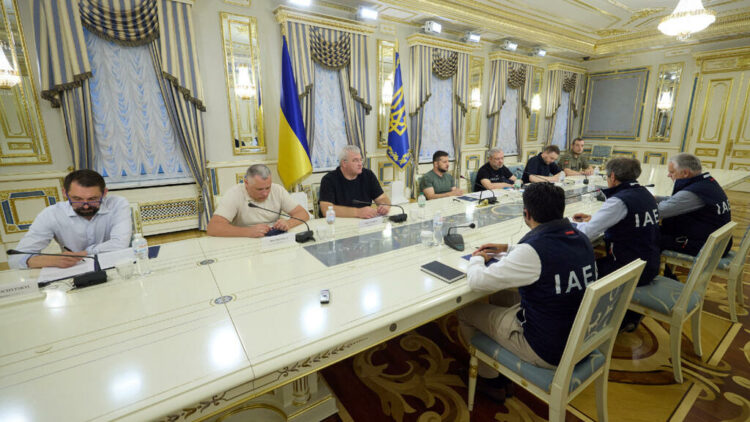 The International Atomic Energy Agency (IAEA) is trying to make its way from kyiv to the Zaporizhia nuclear power plant. There he will try to inspect the largest nuclear plant in Europe. Both kyiv and Moscow have expressed interest in the mission fulfilling its objective. Zelensky has also called for “an urgent demilitarization of the plant” and warns that, in the midst of the fighting, the only options for the Russian military will be “flee or surrender.”

In the midst of fighting near the area where the Zaporizhia nuclear plant in Ukraine is located, the IAEA expert mission, which arrived in the Ukrainian capital on Tuesday, August 30, is trying to make its way from kyiv to Zaporizhia to carry out an inspection before growing fears of a nuclear disaster.

The President of Ukraine, Volodímir Zelenski, met on Tuesday with the Director General of the IAEA, Rafael Grossi, and two other members of the international team. The president asked them to do “everything possible to avoid global threats,” referring to a possible nuclear disaster resulting from the Russian occupation of the plant and the bombing around it.

Zelenskiy emphasized the importance of also producing an “urgent demilitarization of the plant, the withdrawal of all Russian soldiers with any weapons, the liberation of our plant and the creation of a demilitarized zone both inside and around it, in addition to the transfer of its total control to the Ukrainian state”.

However, what makes it difficult to fulfill this task is its proximity to the combat zones and the mutual pointing out of attacks against the plant.

In the city of Energodar, in southern Ukraine and where the plant is located, the Russian Army that controls the area denounced an attack on the plant’s facilities on Tuesday.

The pro-Russian administration of this city says that the Ukrainian forces used large-caliber artillery and “two hits were recorded next to the spent fuel depot building.”

In a statement, the pro-Russian administration assured that with these actions the Ukrainian side seeks to prevent the visit of the UN atomic agency.

“We are confident that the (IAEA) mission will be carried out, as agreed. I repeat: we are interested in this mission and have been waiting for it for a long time,” Kremlin spokesman Dmitri Peskov said.

The spokesman added that Russia insists on “drawing the attention of the entire world community to the irresponsible behavior of the Ukrainian military, which with its attacks on the Zaporizhia plant endangers the facility, the surrounding territories and a much broader geography.” .

For its part, kyiv accuses the Russian Army of bombing the possible routes by which the mission could reach the plant.

The advisor to the Ukrainian Presidency, Mykhailo Podolyak, said on his Twitter account that “everything was predictable. Russia premeditatedly attacks the corridors through which the IAEA mission must access the Zaporizhia nuclear power plant.” And he explains that they do this so that the team of experts has to go through the annexed Crimean peninsula and areas occupied by Russia.

Zelensky urges Russian soldiers to flee for their lives

Ukraine’s president urged Russian soldiers to flee for their lives after his forces launched an offensive to retake southern Ukraine, but Moscow said it had repulsed the attack and inflicted heavy losses on kyiv’s troops.

The Ukrainian president also assured that Russia will not have a “single safe base, a single safe place” anywhere in the occupied zones and, in the end, its only options would be “flight or surrender”.

“If you want to survive, it’s time for the Russian military to flee. Go home,” Zelensky said in his late-night speech. “Ukraine is taking back its own (land),” he said, adding that he would not reveal kyiv’s battle plans.

The arrival of the IAEA team of experts in Ukraine has coincided with the upsurge in fighting in the south of the country, about which kyiv does not want to give information so as not to hinder its march, according to the Ukrainian authorities.

“They will not hear anything concrete from anyone with responsibilities, because it is a war. But the occupiers must know that we will kick them out of the border, from our border, whose line has not been modified. And the occupiers know it very well,” said the President Zelensky in his daily address.

On Monday, August 29, according to the Ukrainian military command, an offensive managed to break through one of the three Russian defensive lines in various sectors of the front.

The spokeswoman for the Southern Command of the Ukrainian Armed Forces, Natalia Humeniuk, assured on Tuesday that the Army of her country “has cut off the logistical support of the Russian invaders through the Dnieper River in the Kherson region through surgical attacks on bridges, pontoons and ferries”.

However, despite the lack of data on the Ukrainian offensive, “all indications point to the recovery of Kherson, the only regional capital conquered by Russian troops since they entered Ukraine on February 24 of that year” , concludes EFE.

Kherson, located on the right bank of the Dnieper, is linked by three bridges, now impassable, to the rest of the homonymous region, which borders the Crimean peninsula. According to Ukrainian military experts, Russian troops receive their supplies from there, a situation that could undermine their operations.

With EFE, AP and Reuters

Free Fire x La Casa de Papel: how to buy items with up to 90% discount