How do plants manage to adjust their growth to survive in adverse environmental conditions? 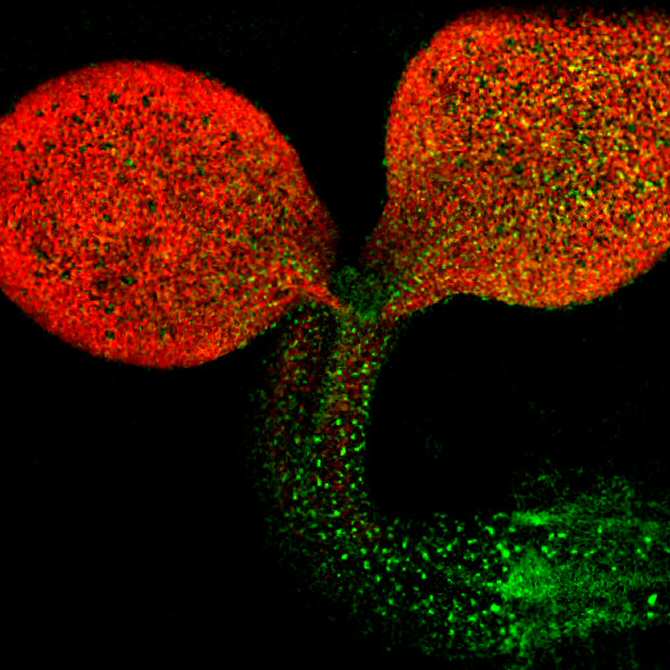 Since the 1960s, corn planting densities in Argentina have more than doubled. A trend that is repeated with different crops both in this country and in many others, which leads the plants to have to adapt to conditions of low light because they shade each other due to being closer to each other. In addition, global warming frequently subjects them to high temperatures. In this context, it is crucial to know the mechanisms of plant readjustment to environmental conditions and thus have more tools to face the changes to come. And be able to obtain sustained returns.

Along this path, a group of researchers led by the agronomist and doctor of Biological Sciences Jorge Casal, head of the Plant Molecular Physiology Laboratory of the Fundación Instituto Leloir (FIL) in Argentina, has completed a study, published in the academic journal Developmental Cell, which has made it possible to describe how, under adverse conditions, plants slow the growth of their cotyledons (the first leaves of the plant embryo) and promote that of the hypocotyl (the stem during early development), to optimize their architecture and survive.

“This is the first work that studies in parallel the molecular mechanisms that cause reductions in growth due to shade or warm temperatures,” emphasized Cecilia Costigliolo Rojas, a graduate in genetics who did her doctoral thesis at the FIL and is the main author of the work.

For his part, Casal explained to the CyTA-Leloir Agency: “Faced with certain changes in the environment, plants do not simply grow more or less. In fact, they often combine increased growth of some organs with decreased growth of others. In this way they change the shape of their body to better adjust to the challenges of the environment.”

“In effect –he continued–, in the plant the organs have different functions (intercept light and carry out photosynthesis or provide support to define the height at which the other organs are located, for example), and when the environment changes it becomes necessary that specifically readjusted to optimize those functions. We knew very little about the mechanisms that plants use to achieve two opposite effects, such as increasing or decreasing the growth of certain organs from the same signal from the environment (warmer temperature or greater shading), and we wanted to understand them”.

According to the scientist, it is quite common among cultivated plants that above a certain temperature or a certain level of shading, the growth of their foliage is reduced. But the mechanisms of this response were not known. “Because it is a general question within plant biology, we use Arabidopsis thaliana as a model to address the question and begin to understand what can happen in crops,” he noted.

The researchers’ strategy was to explore different possible explanations for reduced cotyledon growth due to shade or warm temperatures. All options were based on the possibility that the environment changes the abundance of some growth hormone. “For each case, we ask ourselves two questions: if the activity of the hormonal pathway in question is modified by shade or temperature conditions and, if this change existed, organ growth was affected”, Costigliolo Rojas described.

To answer the first question, they used confocal microscopy to visualize specific proteins fused to fluorescent reporters and analyze whether the treatments effectively modified the activity of the pathway or not. In the case of the second, they used mutants of proteins that participate in the hormonal pathway, which is the way to genetically change the abundance of specific proteins.

“We found that shade impacts components of a hormone pathway that acts as a regulator of plant growth, called brassinosteroid, but not the hormone itself,” Costigliolo Rojas emphasized, adding that once they identified the important components that cause the reduction of cotyledon growth in response to shade or warm temperatures began to investigate how these environmental conditions modified them. “In other words, the steps that mediate between the environment and the proteins responsible for the change in growth,” he noted.

“We saw that, in response to shade or warm temperatures, a growth-promoting protein called BES1 turns down its activity in the cotyledons while turning it up in the hypocotyl. There is a correlation between the growth of these organs and the levels of BES1 in the nuclei of their cells: it rises in the hypocotyl and there is greater growth there; it goes down in the cotyledons and the opposite happens there”, explained Casal. He added: “We also discovered that, in the cotyledons, downstream of the warm temperature and shade sensor, two proteins operate in parallel on BES1 levels. One of them, PIF4, reduces the expression of the gene that codes for the BES1 protein; another, COP1, physically interacts with BES1 and favors its degradation by the cell”.

According to Costigliolo Rojas, “one of the surprising findings of the work is that while COP1 leads to the degradation of BES1 in the cotyledons, it does the opposite in the hypocotyl, since there COP1 protects BES1 so that it is not degraded.” Faced with this, researchers are now analyzing the potential mechanisms that would explain this protection. “It is interesting to know how the environment modifies the growth of organs in a model plant, in order to later try to apply that knowledge to crops,” Costigliolo Rojas concluded.

Santiago Mora-García, Luciana Bianchimano and Mariano Garcia Houquet, also from FIL, are other authors of the work, in which scientists from Korea, Germany, the Czech Republic and Spain also participated. (Source: CyTA-Leloir Agency)