Likewise, gross sales under the banner of the group totaled 8,900.4 million euros, representing an increase of 1.5%, while in Spain they increased by 6.3%, to 5,317 million euros.

In the fourth quarter of 2022, the group’s net sales amounted to 1,779 million euros with a ‘Like for Like’ increase of 7.3%. With this result, the company links three consecutive quarters of increase in comparable sales and positive in the accumulated of the last nine months in all the markets in which it operates.

In Spain, comparable sales rose 11.6% in the fourth quarter, gaining market share, as explained by the company.

Likewise, in the last quarter of the year, the number of tickets has increased by 6.9%, underlining the positive trend registered in previous quarters.

In the year, the number of tickets has increased by 6.7%, with a 0.9% reduction in the amount of the average basket, data that, according to the company, “endorses the good reception and kindness of the model of proximity for which Dia is committed”.

The company has highlighted that this new Dia is “fully implemented” in Spain and Argentina, where 809 and 255 stores have been transformed, respectively, in the last year.

In addition, 23 new stores have been opened in Spain and 101 in Argentina.

In this way, 2,211 stores of the new model already operate in these two markets, 77% of its proximity network.

Additionally, in the last year the company has announced two strategic operations that deepen the focus of the Group: the sale in Spain of a group of large-format stores to Alcampo and the sale of Clarel.

Both operations are pending the fulfillment of various conditions and both processes are expected to close during 2023.

The net sales of the stores affected by the sale to Alcampo and Clarel totaled 761 million euros in 2022.

Excluding from its perimeter the stores affected by the two announced operations, Spain achieved comparable sales growth of 8.3% in the year and 12.5% ​​in the fourth quarter of 2022.

On the other hand, the company has highlighted that the weight of the Dia brand in the customer basket has increased by almost four percentage points in Spain during 2022, to represent 52.6%.

“We have closed a challenging and highly relevant year for Dia in which we have met the objectives set out in our roadmap. The boost in sales confirms that the profound redirection of the business that began in 2019 has served to consolidate a model and a proposal of value winners that brings us closer to the end of the company’s ‘turnaround’ process From here, I appreciate the enormous effort of our teams and our franchisees in this time because this new Day has been achieved thanks to their commitment and a clear strategic guide “, underlined the Global CEO of Grupo Dia, Martín Tolcachir. 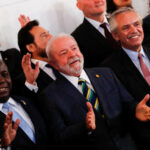