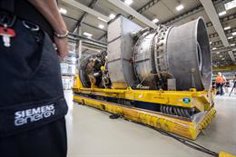 The Russian gas company Gazprom has initiated this Wednesday a cut of the flow of gas supplied to Germany through the Nord Stream 1 gas pipeline that will last three days, justifying it with alleged maintenance reasons.

At 4:00 a.m. in Moscow (3:00 a.m. peninsular time in Spain), a gas supply cutoff began through the gas pipeline that will last until September 3, according to the Russian agency TASS.

From Gazprom they qualify the suspension as necessary for preventive maintenance work at the reception point in the German Greifswald.

The Russian giant already explained on August 19 that the only pumping station that is still active will be temporarily paralyzed and that, once the work is completed, the gas flow will resume at a level of 33 million cubic meters per day.

This amount would be equivalent to 20 percent of the effective capacity. The pipeline can transport up to 167 million cubic meters a day, according to Bloomberg.

Germany relies on this gas pipeline to cover internal demand, after another alternative project, the ‘Nord Stream 2’, has been parked due to the start of the Russian invasion of Ukraine last February.

Christian schools according to the principle of 'truth, charity and freedom'