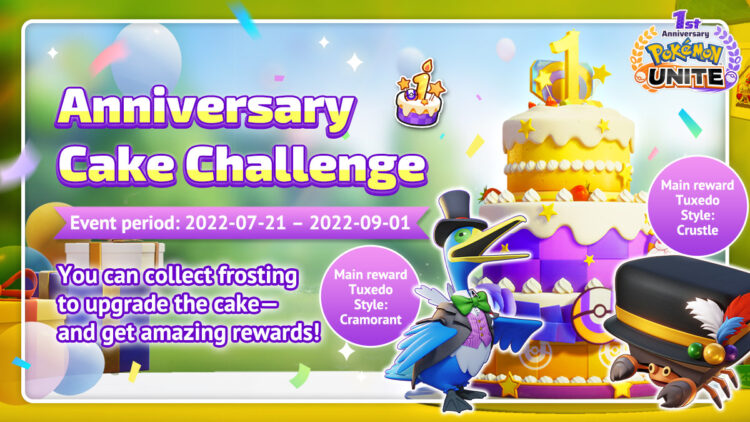 It seems like it was yesterday, but the truth is that Pokemon UNITE It has already been on the market for 1 year; in fact, precisely this week he turned 12 months after his debut. TiMi Studio and The Pokémon Company are celebrating in a big way with tons of new content and cool gifts for fans.

On July 21, the celebration of the 1st anniversary of Pokemon UNITE. As part of this update, players can now enjoy the Anniversary Cake Challenge (until September 1), during which they will be able to earn Frosting, a resource that can be used to obtain Cramorant and Tuxedo Crustle.

Also, the 5th season of the ranked battles has already started, which is offering Tuxedo Decidueye as the main reward if the Master Rank is reached (until August 31). On the other hand, there is already a new Combat Pass, which includes various rewards, among which the Pikachu Band and Wigglytuff Singer holo-outfits stand out.

Pokemon UNITE is giving away all these characters

The most attractive thing about the anniversary celebration is that it is possible to get several UNITE licenses and Holoattire. We are talking precisely about Pikachu + Elegant Pikachu, Lucario + Concert Lucario, Blastoise + Fireman Blastoise, Snorlax + Night Snorlax and Sylveon + Sylveon Tartan.

If you want to get these gifts, you only need to log in 5 days from July 21 to October 12; each unlocks daily upon login, in that order.

Additionally, you can get the UNITE license of Glaceon, the new Pokémon in the game. To obtain it, it is only necessary to complete the special Glaceon challenge before August 14.

The above is not all, but the celebration will continue in the coming weeks. As we told you, Glaceon has just debuted, but he is only one of the 6 characters that will soon come to the title. The second will be Buzzwole, the third Tyranitar and the other 3 will arrive from September onwards.

In case you missed it: The Pokémon Company will create a huge museum of the franchise.

What do you think of the first anniversary celebration of Pokemon UNITE? Tell us in the comments.

Pokemon UNITE is available on Nintendo Switch and mobile devices running iOS or Android. You can find more news related to him if you visit this page.

Related video: pokemon unite: The most hated game in the franchise?