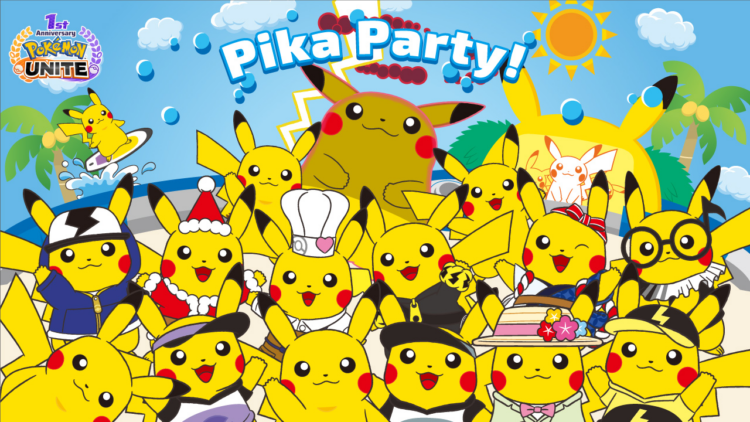 Pokemon UNITE It has just celebrated its first anniversary and is celebrating with various events and gifts for players and a very special guest has just been revealed to commemorate this achievement.

A few days ago TiMi Studios and The Pokémon Company reported on all the events that players could enjoy within the framework of the game’s first anniversary; however, they were in for a colossal surprise, literally.

On the occasion of the celebration, today a new type of Quick Battle or Quick Battle called Pika Party or Pika Pika Battle was announced, in which all the Pokémon in the battle arena will be Pikachu, both the wild creatures and the players, so there is no doubt that they will be electrifying combats. The arena will be decorated with balloons and holograms of the Mouse Pokémon, and to top it off, the adorable chubby Pikachu will also appear in this mode.

We are talking about Pikachu in its Gigantamax or Gigamax form, which will act as a legendary Pokémon. This creature resembles his old version from the anime and video games of yesteryear in which he was less slender. This new form first appeared in Pokémon Sword & Shield.

In case you missed it: new mode Pokemon UNITE allows you to capture and use legendary.

In fact, this inclusion also marks the debut of the Gigantamax phenomenon in Pokemon UNITEalthough it is unknown if there are any plans to allow players’ Pokémon to reach this stage or Dynamax.

This new event debuted a few hours ago, and we recommend you enjoy it while you can, as it will no longer be available on September 1.

We remind you that Buzzwole is already available and is just the second of the 6 Pokémon whose debut is planned for this summer. Also, we invite you to log in to get up to 5 cool UNITE licenses (characters) and Holo Outfits for free.

What do you think of the celebrations of Pokemon UNITE? Tell us in the comments.

Pokemon UNITE is available on Nintendo Switch and mobile devices running iOS or Android. You can find more news related to him if you visit this page.

Related video: pokemon unite: The most hated game in the franchise?

Finsocial multiplies figures in its 10 years