‘French and Mexican cuisines are my two loves’ 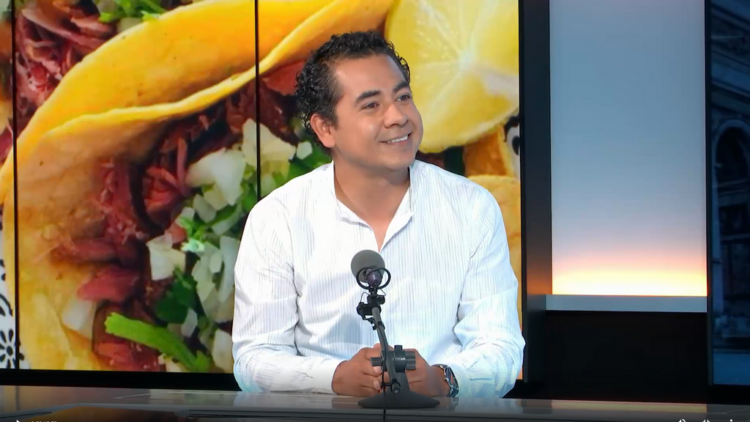 The state of Veracruz, located in the Gulf of Mexico, was selected to present its gastronomy as guest of honor at the 7th edition of the Qué gusto! in France. Mexican chef Othoniel Álvarez Castañeda shared with Escala in Paris some of the secrets of this cuisine that is often unknown abroad.

The French public was able to enjoy a succulent sample of Mexican gastronomy dishes, particularly from the state of Veracruz. With more than 700 kilometers of coastline, Veracruz is known for being the region where the Spanish set foot on land more than 500 years ago, leaving behind a vast culinary heritage.

Veracruz is known, among other things, for two products; vanilla, originally from Papantla, cultivated today in countless countries, and for Coatepec coffee.

the mexican chef Othoniel Alvarez Castanedaknows that cuisine well: “Veracruz is an important producer of sugar cane, pineapple plantations, citrus fruits, oranges, lemons. In the same way we will find all the culinary preparations of that state, the mole, molotes of male plantain The state of Veracruz today has such an extensive gastronomy that sometimes it is not valued, very little is known. That is why the gastronomy of that state was chosen on this occasion.”

On this occasion, the chef offered very selected dishes made with very typical products from Veracruz, for example, a piloncillo puff.

“The piloncillo is the first extraction of the sugar cane juice, the gordita is a thick tortilla, made of nixtamalized corn that we are going to cook dry, in a comal. Then we are going to put it in a fryer with very hot oil. , and the steam that is going to form is what is going to allow the two sides of the tortilla to inflate, and they will have the flavor of the scraped piloncillo and we are going to hydrate it with aniseed tea. It really is a very typical dish from the state of Veracruz,” he says.

Let’s say that French gastronomy and Mexican influence are your two loves. Chef Othoniel confirms: “They really are my two loves. French cuisine is known worldwide as a cradle, a world reference. But we must not forget Mexican cuisine. There are many similarities in dishes, due to the exchange of cultures, but we also have a wide variety of gastronomic things in the country that we will never finish discovering everything.” France and Mexico are the two countries in the world whose cuisine is recognized as intangible cultural heritage of humanity by UNESCO.

The young chef was born in Tenancingo, State of Mexico. He came to France to finish his studies in gastronomy and hotel management. His first steps were in Japanese cuisine, “I learned a lot with typical, traditional, Japanese food.” And now his favorite sport is to make a fusion between Mexican, French and Japanese cuisine. “It’s extremely important for me to have that experience,” he says.

Like all cuisine that is respected, it is necessary to innovate, update experiences, include new tastes, flavours, mixtures, a real challenge: “It is not easy. To make it evolve, you have to find a balance to carry out both. A traditional cuisine is it has to respect one hundred percent. Perhaps the techniques, the ingredients, the preparation methods should be the same, but the same with modern things. It is delicate and you have to find the middle ground so that it is good, it also has an impact durable towards the client, or towards our guests. But it is also very exciting to be able to create, to be able to do it”.

Gastronomic cuisine has long since become big business. Just count the number of schools and programs of all kinds that offer to teach good cooking. And the multitude of people who are interested in it, a reflection of a society attracted by entertainment.

“Studying gastronomy is not for everyone. It is a rigorous discipline that must be treated with respect, avoid falling into a trap. If we want to do business, we can do it, but in gastronomy you have to know how to respect the product, the seasons “Today we live in a world in which it will be much more difficult for us to feed ourselves. It is a business because every human being needs to eat, and what better way to eat something good and tasty,” says Chef Othoniel.