After a year of disagreements between France and Germany, Scholz and Macron are trying to appear together to celebrate the anniversary of the Elysee treaty, which sealed the Franco-German friendship 60 years ago. Scholz was invited to Paris where they are expected to address issues such as the war in Ukraine, energy and the European economy. A symbolic meeting that will serve to measure the degree of understanding between the two leaders.

The German Chancellor, Olaf Scholz, was received in Paris this Sunday, January 22, by the French President, Emmanuel Macron, on the occasion of the 60th anniversary of the Elysée Treaty, signed in 1963 by Charles de Gaulle and Konrad Adenauer, ending years of wars and confrontations, and sealing this friendship after the Second World War.

“It marked the end of decades, if not centuries, of bitter rivalry and bloody wars,” the two leaders wrote in a joint article published in the Frankfurter Allgemeine Zeitung and the Journal du dimanche.

“On January 22, 1963, 60 years ago, the Germany of Konrad Adenauer and the France of General de Gaulle sealed their reconciliation. On that day, our two countries decided to open wide the doors to a new future for Germany, to France, for Europe,” Macron tweeted.


This year, the celebration of Franco-German friendship is particularly scrutinized as Berlin and Paris have experienced months of turbulence and disagreements over some of the main issues on the European agenda. In fact, in October, this annual meeting had to be postponed due to disagreements between the two powers on energy and defense issues.

The French president and the German chancellor began with a ceremony at the Sorbonne university before a joint council of ministers between the two countries. Emmanuel Macron called for both countries to become “pioneers of the reconstruction” of Europe.

“Germany and France, having paved the way for reconciliation, must become pioneers in the re-foundation of our Europe,” he declared, addressing Chancellor Olaf Scholz.

Macron insisted on the need to “build a new energy model”, to collaborate on “tomorrow’s innovation and technologies” and to promote a “European Union capable of assuming its role as a full-fledged geopolitical power, in terms of defense, space and diplomacy”.

For his part, Olaf Scholz recognized the importance of the “Franco-German locomotive” and the need to find compromises to move forward.

“The Franco-German engine is a compromise machine, a well-oiled machine, but it can be noisy at times and shows hard work. It doesn’t work with flattery and empty symbolism,” delcaró said.

Defense and industry at the center of conversations

French President Emmanuel Macron wanted to reaffirm European unity in the face of the war in Ukraine.

“Since February 24, we have not hidden or divided and we will continue with our unfailing support for Ukraine, which will continue in all areas,” Macron told the Sorbonne.

For his part, the German chancellor recalled his country’s commitment to military support for Ukraine, “as long as it is precise and as broad as needed”, including tanks and air defense batteries, “in close consensus between us and with our allies of the United States”.

The two countries should address the highly anticipated issue of the German “Leopard2” tanks that Ukraine claims in order to increase its military capacity, but whose shipment has not yet been authorized by Berlin.

Curbing the rise in energy prices could also be at the center of the Franco-German couple’s talks.

On the other hand, missile defense could be another topic of discussion. The Future Air Combat System (FACS) has not brought the two countries together, as Berlin promotes a shield project with an Israeli component that 14 European countries want to join, while Paris works on its own system, with Italy, on behalf of of Europe’s “strategic autonomy”.

Regarding the disagreements between Scholz and Macron on the industry, the two parties could reach an agreement on the response to the Inflation Reduction Act (IRA) of the United States, which is of great concern to the European Union but which is common to both countries.

In any case, the chancellor and the president affirmed their desire for “Europe to be even more sovereign”, investing more in defense and adopting “a strategy to strengthen European industrial competitiveness”.

With EFE and AFP 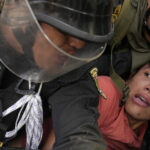