FIFA will invest more than 1,000 million euros in women’s football until the 2023 World Cup 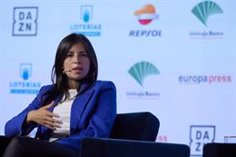 The International Football Federation (FIFA) will invest more than 1,000 million euros in women’s football before the 2023 World Championship, which will be played in Australia and New Zealand, and has set a goal of doubling to reach 60 million players in 2026.

The European Championship in England has shown that women’s football has more and more followers. The game that pitted Spain against Denmark, in which the place in the EURO quarter-finals was at stake, was followed by more than 1.6 million viewers, and the elimination against the hosts England, 2.4 million, some record figures in the country of bull skin.

In this sense, the Director of Development of the FIFA Women’s Football Division, Arijana Demirovic, who has been working daily with FIFA’s 211 member associations for more than nine years, firmly believes in the positive social transformation that the football.

This transformation is seen through the implementation of the programs and other actions of FIFA, which supports its member associations around the world to optimize their women’s football structures and resources.

“FIFA has committed to investing more than €1 billion in the current four-year cycle, from 2019 to 2023, before the next Women’s World Cup in 2023. This has sought to ensure the sustainable growth of women’s football. The investment It is currently being carried out at different levels and in a wide range of areas, including competitions, prize money, development programs, but without forgetting governance and leadership training,” he told Europa Press.

These convulsive years of the pandemic have not gone unnoticed by the highest body in world football, which distributed almost 100 million euros to 197 associations to face the economic and health crisis. “These investments in women’s football are very important to us and will continue for years to come,” he noted.

FIFA has set itself the goal of doubling female participation to 60 million players by 2026. For this reason, it supports women in aspects ranging from menstrual hygiene to the education that girls who play football receive in countries on process of development.

In 2021, FIFA launched a program with South Sudan in which it cooperated with the country’s Football Association to bring information on menstrual hygiene and education to girls in the country with its pilot project.

Arijana Demirovic recently visited Gambia, a country that is very active in the development of women’s football and with which she has launched a development program to organize an under-17 women’s league and improve the training of its coaches. “We participated in the coaches’ course and in the presentation ceremony for the second edition of the league. In addition, the federation organized the Women’s Soccer Symposium to show the progress made, as well as to ask the public and private sectors to continue supporting the women’s football,” he explained.

“Hearing the players and coaches talk about what it means to them to be able to participate in this competition and how it prepares them for their future development was truly inspiring and motivated the FIFA team and I to continue supporting them through our different initiatives,” he added.

The head of FIFA revealed that at a global level they are working “tirelessly” with the member associations in the professionalization of women’s football, such as in Spain where it will debut in the 2022-23 season, and in improving the structures of the clubs and leagues around the world.

For the Director of Development of the FIFA Women’s Football Division, it is very exciting that women’s football is growing so fast and she feels “tremendously privileged to be part of this development”.

“Progress is constant and we have seen the interest of fans grow a lot, with great audience records in club football, such as in Spain and Mexico. Now we are seeing audience records in continental championships, such as the Women’s Euro Cup that is taking place in England, and women’s football broadcast deals are being sold to more territories, and sponsorship deals are being signed specifically for women’s football.”

In addition, for FIFA it is necessary to “maintain the rhythm and the excitement and the interest in the growth of women’s football for the whole world, and in a sustainable way”. “While ensuring that the competitiveness in national team football and club football remains high globally,” she stressed.

THE FUTURE OF THE BIG COMPETITIONS

Before the 2023 World Cup, FIFA will promote improvements to continue ensuring that women’s football does not lose the great competitiveness that it hosts distributed among its different teams. Some of the best teams play on different continents like the United States, Canada, Brazil, North Korea, Germany, and Australia.

Any one of these teams from five different continents has a good chance of winning the World Cup in 2023, and the global competitive level of women’s football appears to be much higher compared to men’s football.

“The 2023 World Cup will be a championship with multiple changes, since it will be the first edition with 32 teams, the first to be held in two continents and confederations and the first with 10 stadiums and 64 games played. The prize money is, Of course, an important mechanism that relates specifically to the elite of women’s football, and FIFA has already committed to doubling the prize money for the 2023 edition,” he said.

Finally, it highlights that the main European clubs are investing a lot in women’s football, such as FC Barcelona, ​​Atlético de Madrid and Real Madrid, which could lead to a weakening of the global competitive level as it happens with the men’s European leagues compared to the rest of the leagues in the world. Therefore, FIFA will continue to strive to ensure that the global competitive level of women’s football is maintained and even “extended”.

"We are very concerned about political prisoners" in Nicaragua: Foreign Minister of Costa Rica

Mario Draghi or how to govern Europe