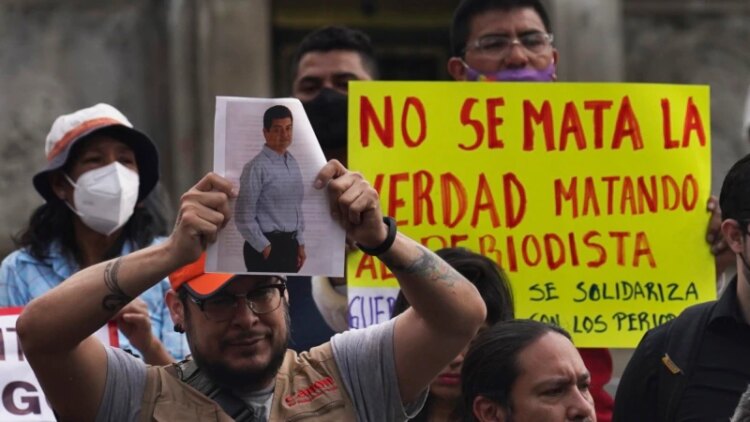 “President, president, please, they threatened me with death,” shouted Rodolfo Montes, an independent investigative journalist, just as López Obrador was about to end the conference.

Montes expressed with a voice broken by tears, that he received a call with a death threat from those who “presented themselves as the Jalisco New Generation cartel”, but said that he suspected someone else: “they are hiding a public servant”.

He assured that he received the threat when he was in the state of Quintana Roo, on the Caribbean coast, and that officials from the Ministry of the Interior helped him get out of there.

The reporter asked the president for help to give him an escort and added that due to the threats, his daughter left the country at dawn on Wednesday.

“We will always protect you, count on us,” replied López Obrador.

According to the Mexican press, on February 16, Montes took advantage of his speech at President López Obrador’s morning press conference to “not ask questions” as a protest against the murders of several of his colleagues this year.

Montes is a reporter with more than three decades of experience, a contributor to national media such as the magazine Proceso or the Milenio group, and who usually conducts investigations on corruption, abuse of power or drug trafficking.

As he explained in an interview with APalthough he has been a member of the federal mechanism for the protection of journalists for a year, only at certain times has he had an escort.

Montes believes that the current threats do not come from drug traffickers, but are linked to an investigation into a Mexico City official involved in an alleged crime, a case that he has already reported to the prosecutor’s office and about which he has been asked not to provide information.

“I feel like they are going to kill me at any moment,” he declared. That is why he chose to plead with the president.

Mexico is considered the most dangerous country on the continent for the press, something that has also been pointed out by high-ranking US and European officials.

The organization Article 19 also recalls that impunity in attacks on informants is 98% and that the majority come from public officials.

They seek to bring mathematical solutions to industrial problems