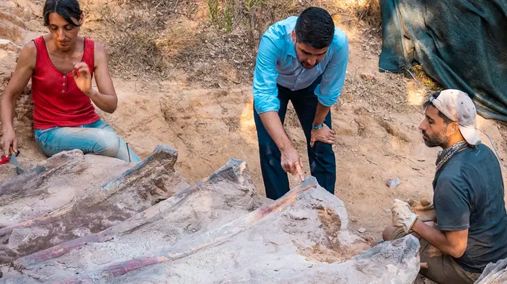 A team of Portuguese and Spanish paleontologists found in Pombal, in central Portugal, part of the skeleton of a large sauropod specimen, which could be the largest dinosaur found in Europe. The discovery was made in early August at the Monte Agudo sitewhere they have been working since 2017 after the owner of a piece of land warned that he had found bone remains when he was going to carry out construction works, the Faculty of Sciences of the University of Lisbon reported in a statement.

The works were carried out by researchers from the Dom Luiz Institute, attached to the Lisbon University; of the Evolutionary Biology Group of the UNED-Madrid, and of the Faculty of Fine Arts of the Complutense. The remains of the skeleton, of “enormous size” and including vertebrae and ribsbelong to a sauropod specimen, a group of herbivorous, quadrupedal dinosaurs characterized by having long necks and tails.

The specimen would be from the brachiosaurid family, made up of large species that lived from the Upper Jurassic to the Lower Cretaceous. The remains maintain the “original anatomical position” that they would have in the animal in life.

“This mode of preservation it is relatively rare in the dinosaur fossil recordin particular of sauropods, from the Portuguese Upper Jurassic”, explained the Faculty, which advanced that it is suspected that there may be other parts of the skeleton in the site.

Thus, more excavations will be carried out at Monte Agudo in the future.

VATICAN The Pope inaugurates a new cycle of catechesis on discernment