“The mission is to avoid a nuclear accident” 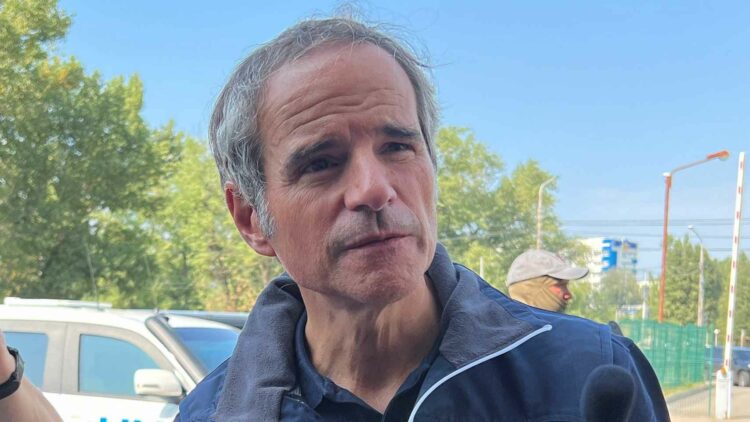 A team of experts from IAEAthe UN nuclear agency, has arrived this Wednesday in the Ukrainian city of Zaporizhia, from where it will depart for the nuclear plant of the same name and occupied by Russia since March, to an inspection that seeks to avoid an accident at the plantunder attack for weeks.

“My mission is a technical mission that seeks to prevent a nuclear accident and preserve the largest nuclear plant in Europe. That is what we are focused on,” Rafael Grossi, director of the Vienna-based International Atomic Energy Agency (IAEA), told the media.

“The mission will last a few days and if we are able to establish a permanent presence, or better said, continuous, then it will be prolonged,” said the director general, according to video images distributed by the IAEA itself from Ukraine.

The day has come, @IAEAorg‘s Support and Assistance Mission to #Zaporizhzhya (ISAMZ) is now on its way. We must protect the safety and security of #ukraine‘s and Europe’s biggest nuclear facility. Proud to lead this mission which will be in #ZNPP later this week. pic.twitter.com/tyVY7l4SrM

The team of 14 expertsled by the Argentine diplomatwill go to the plant, located about 120 kilometers from the city, already in territory occupied by Russia since the first days of the invasion it launched at the end of February against Ukraine.

Asked if a prompt demilitarization of the plant is possible, Grossi pointed out that this is a political decision of the countries at war, especially Russia.

IAEA mission arrives in Zaporizhzhia. Hope they will make it to the Nuclear Power Plant safe. pic.twitter.com/mWI5oqNtcP

About if you trust that the Russian military will give them access to determine the situation at the plantthe IAEA chief said the team is made up of “very experienced” security and safeguards experts, and that they will be able to get a very good idea of ​​what is going on.

The general director insisted that one of the objectives will be to speak with the Ukrainian staff that operates the plant, subjected according to the agency to enormous physical and mental stress.

The center was recent bombing target that damaged some of its facilities, and the IAEA has been warning for months of the risk of a nuclear disaster and requesting permission to carry out this mission.

The Russian Defense Ministry on Wednesday accused the Ukrainian authorities of trying to thwart the IAEA mission.

“The kyiv regime continued its provocations on August 30 to derail the IAEA mission and ccreate a threat of technological disaster at the Zaporizhia nuclear power plant“said military spokesman Igor Konashenkov.

According to Konashenkov, during a bombardment against the plant, the solid radioactive waste recycling building was hit.

“The enemy’s artillery unit was overwhelmed by return fire,” he said, adding that radiation levels at the atomic plant were within the norm.

The Russian Deputy Foreign Minister Andrei Rudenko assured this Wednesday that the intention of the IAEA to leave a permanent mission in the plant “is being discussed”.

“That is not ruled out,” the diplomat told reporters in Moscow while asking to wait, because the inspectors “have not yet arrived” at the plant.