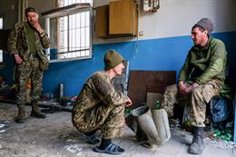 The authorities of the self-proclaimed People’s Republic of Lugansk (PLR), have denounced this Monday that the Ukrainian Army has launched five HIMARS rockets in the last day, in the Alchevsk settlement.

Lugansk has warned that the attacks began at 3:00 p.m. (local time) on Sunday night.

The Ukrainian military last month launched six HIMARS rockets aimed at the Krasny Luch settlement in the breakaway Luhansk region. The rockets landed in the center of the settlement, injuring three people and destroying a hotel.

The self-proclaimed republics of Donetsk and Lugansk declared their independence in 2014 amid conflict in eastern Ukraine. Russian President Vladimir Putin recognized its independence in February, days before ordering the start of a military invasion of the country.

On February 21 this year, Russian President Vladimir Putin announced the recognition of the sovereignty of the Donetsk and Lugansk People’s Republics. Russia signed friendship, cooperation and mutual assistance agreements with its leaders. Russia recognized the Donbass republics in accordance with the DPR and LPR constitutions within the boundaries of the Donetsk and Lugansk regions since the beginning of 2014.

The role of parents so that children respect others