Putin circumvents general mobilization with the creation of volunteer battalions 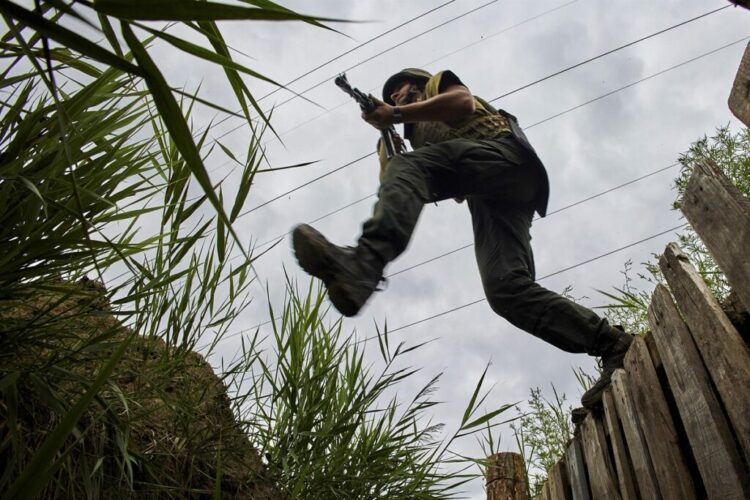 This Thursday marks 162 days since the Russian invasion of Ukraine began. Since the conquest of the Lugansk region a month ago, the Russian Army has barely made territorial gains in Donbas and in the southern area, bordering the annexed Crimean peninsula, it is limited to defending its positions. Meanwhile, Ukraine is seeking an opportunity to speak “directly” with Chinese President Xi Jinping and ask him to use his influence over Russia to end the war, according to the Ukrainian president, Volodymyr Zelenskyin a interview with the hong kong newspaper South China Morning Post posted today. The Ukrainian president explained in the first interview granted to an Asian media that “China, apart from being a permanent member of the United Nations Security Council, is a very powerful country with a powerful economy, which makes it have economic and political influence in Russia”.

At least eight people have been killed in a Russian bombardment of a bus stop in the Ukrainian city of Toretsk, a city in the Donetsk region (eastern Ukraine) controlled by kyiv, regional authorities reported today. The attack has also caused four injuries, including three children, according to information from the regional authority collected by the Ukrainian news portal Ukrinform, which cites the head of the regional military administration, Pavlo Kyrylenko.

Ukraine denounces about 26,500 “crimes of aggression and war” by Russian forces

The authorities of Ukraine They have denounced this Thursday that the Russian forces have committed around 26,500 “crimes of aggression and war crimes” within the framework of the invasion, unleashed on February 24 by order of the Russian president, Vladimir Putin. The Ukrainian Prosecutor’s Office has indicated in a message posted on its Telegram account that to date it has documented 26,465 crimes by Russian troops, including 25,473 related to violations of the laws of war.

Likewise, it has stated that 12,482 “crimes against national security” have also been documented, including more than 8,600 related to the occupation of Ukrainian land and more than 1,500 on treason.

The Prosecutor’s Office has also indicated that, among the “crimes against national security” there are more than 1,700 cases of “collaboration activities” with Russian forces, more than one hundred of “assistance to the aggressor State” and about 65 on acts of sabotage .

Putin avoids general mobilization with the creation of volunteer battalions

The Russian President, Vladimir Putin, has found an alternative to general mobilization, to which the Russians are adamantly opposed, the creation of volunteer battalions, which should solve the desperate lack of men on the Ukrainian front. “Today you leave to defeat Fascism“, assured Radi Jabírov, head of the Bashkiria region, one of whose battalions left for the neighboring country on July 6.

Since the conquest of the Lugansk region a month ago, the Russian Army has barely made territorial gains in Donbas and in the southern area, bordering the annexed Crimean peninsula, it is limited to defending its positions. The Russians support the “special military operation,” according to official polls, but are unwilling to send hundreds of thousands of recruits with no military experience to fight in a foreign country.

The organization Amnesty International has denounced this Thursday that the Ukrainian forces endanger the civilian population by establish military bases in residential areas and launch attacks from areas inhabited by civilians. In a statement released this Thursday, the NGO indicates that these violations in no way justify Russia’s indiscriminate attacks, which have caused the death of countless civilians.

“Ukrainian forces put civilians at risk by setting up bases and operating weapons systems in civilian-inhabited areas, including schools and hospitals, to repel the Russian invasion that began in February,” it says.

The United States Senate approved this Wednesday the requests for Finland Y Sweden to enter the NATO, a decision that has received 95 votes in favor and only one against. Specifically, the measure has been supported by practically the entire US Senate, with the exception of Republican Senator from Missouri Josh Hawley, who has argued his position assured that the United States should concentrate on containing China instead of expanding the Atlantic Alliance. , as reported by ‘The Washington Post’.

After that, the president of the United States, Joe Bidenhas shown his willingness to ratify the access protocols and has highlighted that both countries, which he has described as “two firm democracies with very capable armies”, will be welcome “in the greatest defensive alliance in history”.

The Ukrainian authorities today reported several air strikes on the outskirts of the city of Zaporizhia, in the center of the country, a region where the nuclear power plant occupied by Russian troops is located, as well as three civilians killed in Donetsk, in the east. Two missiles They hit a block of flats in Zaporizhia and other civilian targets, according to sources from the Mayor’s Office, collected by the Ukrinform portal. The largest nuclear plant in Europe is located in the Zaporizhia region, under the control of Russian troops since March, a situation repeatedly warned by the International Atomic Energy Agency (IAEA), whose experts do not have access to the site. The regional authorities of Donetsk, in the east, reported on the other hand of several attacks on the populations Bakhmut, Marinka and Shevchenko, in which three civilians would have died and another five were injured. The Ukrainian troops try to contain the Russian advance on this eastern region and also on the south. The aforementioned portal also reports new missile attacks in the Kharkov region, in the northwest.

The UN will investigate the death of prisoners of war

The Secretary General of the United Nations, António Guterres, announced on Wednesday the launch of an investigation commission into the attack on the Olenivka prison, in the Ukrainian region of Donetsk, where more than 50 prisoners died. According to António Guterres, the United Nations received requests for investigation by both Russia and Ukraine, as each has repeatedly accused the other of being responsible for the bombing. “I don’t have the authority to conduct criminal investigations, but I do have the authority to launch an investigative mission,” she said.

Pokémon Trainer Scarlet & Violet could be gay or transgender