Poland is dissatisfied with the German government’s arms offer 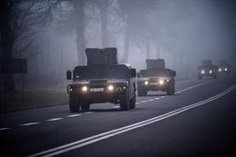 The Polish Defense Minister, Mariusz Blaszczak, has declared that he is dissatisfied with the offer of the German Government to deliver only twenty tanks to Warsaw to “fill the gap” of the donation of 200 units made to Ukraine.

Blasczak has indicated that his German counterpart, Christine Lambrecht, has offered 20 tanks to increase the Polish country’s defense stock, while Warsaw expects at least 44 tanks, according to a preview of the wPolityce.pl portal of an interview published this Monday. in the weekly ‘Sieci’.

The German government has “recently” offered Poland the delivery of tanks to “fill the gap” that had been generated by the donation of more than 200 tanks to Ukraine for the war started on February 24 by Russian troops.

“They asked me if we were interested in Germany helping us fill the gap that had arisen. I answered yes, of course,” the minister described.

However, Blaszczak has criticized that, in the condition in which the equipment is found, “it will take about twelve months to put them in operational conditions”, since they cannot be used.

Therefore, Poland hopes that negotiations will continue so that Berlin agrees to offer at least 44 units to equip a battalion.

Previously, the Polish Foreign Minister, Szymon Szynkowski vel Sek, had told the German magazine ‘Der Spiegel’ that such promises about replacing tanks had turned out to be “a misleading move”. “The Germans offered Poland tanks that were much older than the ones we sent to Ukraine. That offer was not acceptable to Poland and we are seeking help from other NATO countries,” Szynkowski vel Sek said.

For her part, the German Foreign Minister, Annalena Baerbock, had admitted that the exchange plan for the indirect supply of weapons to Ukraine is not working as planned, according to the German news agency dpa.

“In a situation like this, nobody cheats their European neighbor,” said the holder of the portfolio, explaining that the exchange was started because it seemed to be “the best and fastest way at the time.” “It was clear from the beginning that, of course, we cannot replace all tanks overnight with a snap of the fingers,” Baerbock responded to Szynkowski’s accusations.

The Mossad believes that Iran did not carry out the attack against the AMIA in Buenos Aires, according to 'The New York Times'

RUMOR: The Last of Us prepares collaboration with Fortnite