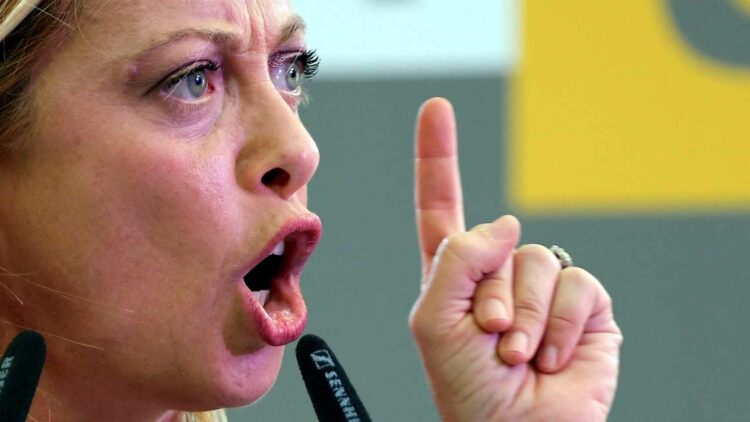 Giorgia Meloni play clueless. After years forging an ideology of the extreme right at the head of his party, Brothers of Italy, the politician has now published a video in which he condemns fascism and denies an anti-democratic drift in Italy. In the video broadcast this Wednesday, Meloni has assured that for the Italian right “fascism is history decades ago” and condemns “unambiguously the deprivation of democracy and the infamous anti-Jewish laws.”

The video is recorded in English, French and Spanish and is aimed at the foreign press. In it, Meloni assures that his party, with neo-fascist origins, is more like “British Conservatives, American Republicans and Israeli Likud”.

The publication has caused a stir in Italy, where his rival Enrico Letta, the leader of the centre-left Democratic Party, suggested that his comments were merely cosmeticyes There are clear indications that Brothers of Italy, a descendant of the Italian Social Movement (MSI), a party founded by a minister in Benito Mussolini’s dictatorship, has not completely severed ties with its past.

A few days after the elections, Meloni told Corriere della Sera that there were no “nostalgic fascists, racists or anti-Semites in the DNA of the Brothers of Italy” and that she had always gotten rid of “people with ambiguous speeches”. More recently, however, Meloni, whose motto is “God, country and family”traveled to Marbella where he unambiguously expressed his hard line on immigration and homosexuality in a very aggressive speech during a Vox rally.

Islamist violence, illegal immigration, “ethical violence” associated with it or gender ideology have been some of the issues that have focused the Italian’s speech in which she has denounced that “the true objective of gender ideology is not equality but the disappearance of women”.

Over the years, Meloni has always tried to steer his party away from fascist connotations. In his book, I’m Giorgia, insisted that he did not belong to the “cult of fascism”. “The Italian right has condemned fascism decades ago and unambiguously condemns the deprivation of democracy and the infamous anti-Jewish laws. We clearly condemn Nazism and Communism“, Meloni now points out in the video.

However, his connections with the fascist ideology are evident. Meloni entered politics at the age of 15 in the post-fascist Italian Social Movement, of which he is the heir Brothers of Italy. Brothers of Italy has retained MSI’s tricolor flame in its official logo and its headquarters are located at the same address, on Via della Scrofa in central Rome, where MSI established its office in 1946.

In addition, Enrico Michetti, who was the party’s mayoral candidate, said during his campaign that the Roman raised-arm salute, which has fascist connotations, should be revived as it was more hygienic in times of Covid-19. Mussolini’s granddaughter, Rachele, a member of the Brothers of Italy, won the most votes in the Rome council elections last October.

“The video is very different from the speech he gave on Vox,” he told Guardian Luciano Cheles, Emeritus Professor of Italian Studies at the University of Grenoble. “She’s cunning… obviously, he adapts his appearance and attitude to the audience“.

Brothers of Italy leads a coalition that includes Matteo Salvini’s far-right League and Silvio Berlusconi’s Forza Italia, which is expected to win the general election on September 25. According to the latest polls, Brothers of Italy would be the most voted party, with a 24.2% of the votes.

Research by Cheles has highlighted that often fascist images are used in posters, brochures and hymns of the Brothers of Italyand that Meloni’s catchphrases frequently echo those used by Mussolini in his day.

In July, when Mario Draghi’s government collapsed, Meloni took the stage in Piazza Vittorio, a square in a multicultural area of ​​Rome, and told his supporters: “We have had three different governments, three different majorities [desde la elección general de marzo de 2018]. elections]. Has any worked? Nope. History has proved us right“.

“In an interview with a fascist journalist five days before his death, Mussolini said: ‘History will prove me right… a young man will rise up, a leader who will inevitably stir up the ideas of fascism,'” recalls Cheles. “I don’t think what Meloni said in Piazza Vittorio was accidental“.

the five challenges the next president will face