national and international threats endanger the unity of the EU

The war in Ukraine has directly impacted the waterline of the European Union. Inflation and the energy restrictions derived from it have unleashed a political whirlwind in some of the key members that threatens to blow up the relative stability achieved after the pandemic. Thus, at external danger that Putin supposes and his unjustified invasion of a sovereign country is now added to the wave of populismfrom the right and from the left, that lie in wait for states like France and Italy.

The transalpine country is perhaps the best example. At least the most recent. On July 21, the resignation of Mario Draghi caused a political crisis that revived the ghosts of fascism. It was after the coalition government, made up of two right-wing parties -La Liga and Forza Italia- and the anti-system 5 Star Movement (M5E) party, decided to abandon the former Italian Prime Minister and lead the country to early elections in which the extreme right starts with an advantage.

Specifically, it is the heir party to fascism Fratelli d’Italia the one who wins integers for the elections next September. This is supported by the latest national polls, which present their leader, Giorgia Meloni, as the favorite to replace the brand new technocrat who has ended up throwing in the towel. She would have to achieve it, yes, reaching out to her possible electoral partners and those responsible for the political assassination of Draghi: Matteo Salvini and Silvio Berlusconi.

Giorgia Meloni, together with Silvio Berlusconi and Matteo Salvini.

Whatever the result that comes out of the polls, the next Italian head of government will have to face some budgets, the management of recovery funds after the pandemic and, above all, to the energy and supply crisis.

This last point seems to be of particular concern to the European Union, where Draghi, former president of the European Central Bank, enjoyed a certain prestige. And it is that with a strong energy dependence on Russian gas (more than 40%), post-Draghi Italy could turn against the sanctions on Moscow.

Above all because Draghi has led the European initiatives to hit Russia’s economy, but also because the Italian right has criticized from the beginning the European restrictions on Moscow. Such has been the opposition that Salvini even proposed going personally to Russia to negotiate peace with Putin.

Today it is Italy, but the extreme right of Marine Le Pen It has been threatening the internal stability of France for years. Now, however, the government of Emmanuel Macron is receiving threats from different sides. Some of them brand new.

A priori, the extreme right continues to be one of the main concerns of the French president. And it is not for less: National Group, the party led by the far-right Le Pen, won 89 seats in the second round of the legislative elections, held at the end of June. They were the best results of the extreme right in France in 35 years.

However, Macron’s main headaches now come from the other side of the political bench. Because although the left seemed to run out of steam at the beginning of the year with a Socialist Party at a minimum, the leftist coalition NUPES has managed to become the first opposition force and strip Macron of the absolute majority in the National Assembly that he had enjoyed since 2017. A defeat that forced the prime minister to reshuffle his cabinet from top to bottom.

Not content with this, the leader of the leftist coalition, Luc Mélenchon, leader of the France Insumisa (allied with Podemos in Europe) led a motion of censure two weeks ago. A failed attempt to bring down the Government, but which has contributed to destabilizing Macron, a staunch defender of Europeanism. And he has done it, moreover, at the worst possible time: France has declared a “war economy” to cushion the rise in prices and reinforce energy independence.

The German Chancellor, Olaf Scholz, has put all the cards on the table and has announced to the citizens that dark times are coming, of scarcity and rising prices. He himself has received with open arms the proposal of the European Commission (EC) to cut 15% of national gas consumption. A sample of the critical state in which Berlin finds itself, that he fears not being able to fill the hydrocarbon reserves for winter. 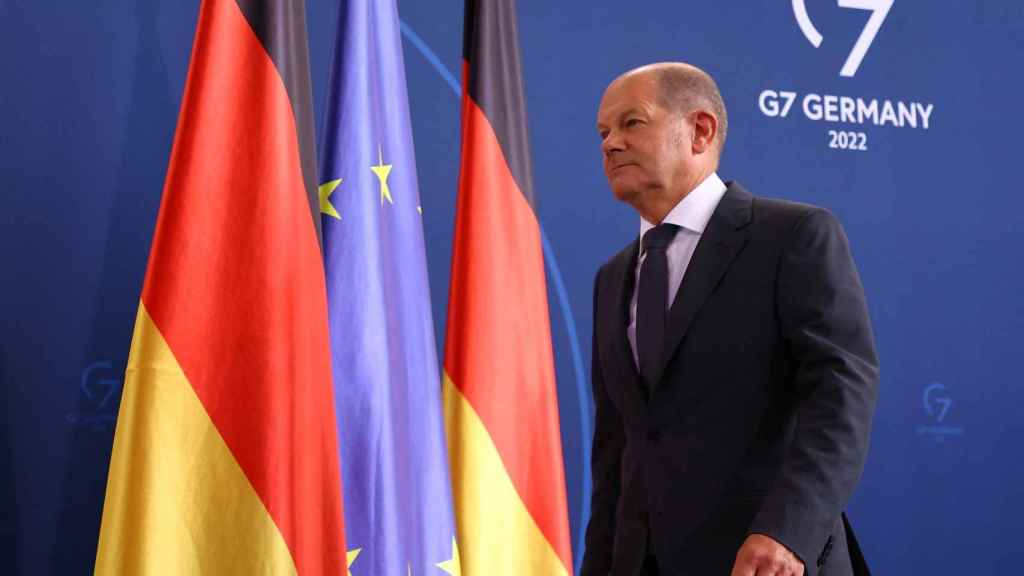 German Chancellor Olaf Scholz during his appearance on the energy crisis this Friday, July 22

However, the measure presented by Ursula von der Leyen has reopened the schism between north and south caused at the time by the 2008 financial crisis. And it is that the Brussels plan has been rejected by countries such as Spain or Portugal, which consider that the reduction is exclusively the responsibility of countries highly dependent on Russian gas supplies, such as Germany.

So this time the roles have been reversed: now it is Berlin that, in a vulnerable situation, appeals to “solidarity” and Madrid that refuses to come to its aid. It is the same solidarity that Spain demanded from the EU when it asked for the bank rescue in 2012 and on which Germany put conditions and demanded reforms.

Aligned with the position of the Iberian countries, Greece has also rejected the energy proposal. However, the discussions with his European partners are the least of his problems. The threat, in his case, comes from the east.

Relations between Turkey and the Hellenic country have been tense for decades due to the sovereignty of the Greek islands of the Aegean Sea, whose waters hide vast deposits of hydrocarbons. In the last 50 years alone, these two NATO members have come close to going to war three times.

Now, Turkish President Recep Tayyip Erdogan has directly claimed sovereignty over the territory and has warned that he will respond if Greece “continues to arm the area.” An answer that could resemble the one from 1974when Turkey occupied 38% of the territory of the island of Cyprus, today divided in two.

The moment that Erdogan has chosen to revive the conflict is not accidental. The Turkish leader has just reasserted his influence in NATO, first by vetoing and then unblocking Finland and Sweden joining the military alliance. A historic decision -that of the Nordic countries- that confirms the serious security threat facing Europe.

Because not only Finland and Sweden fear a Russian attack. The war in Ukraine has also unsettled the baltic countries. And it is that even though they are protected by the EU democratic wall and NATO military wall, complicated historical ties and proximity to Russia make them vulnerable to invasion. Especially since the closure of the Suwalki corridor – a strip of about 100 km that links the Russian exclave of Kaliningrad with Belarus – would isolate them from any ground assistance from the allies.

Putin’s war in Ukraine has also achieved the impossible: undermine the Polish-Hungarian axis. Both countries, united by the authoritarian and ultra-nationalist tendencies that characterize the governments of Viktor Orbán and Mateusz Morawieckithey have been for years giving a pulse to the EU at the expense of the rule of law and the independence of powers. A challenge that the Club of 27 has punished by blocking millions of euros in aid.

The separation was completed last March, when a delegation from the Polish government traveled to kyiv to show its support for Ukraine. Meanwhile, in Hungary, Orbán decided to stay out of the war to protect their interestswhich implies not angering his ally, the Russian president. 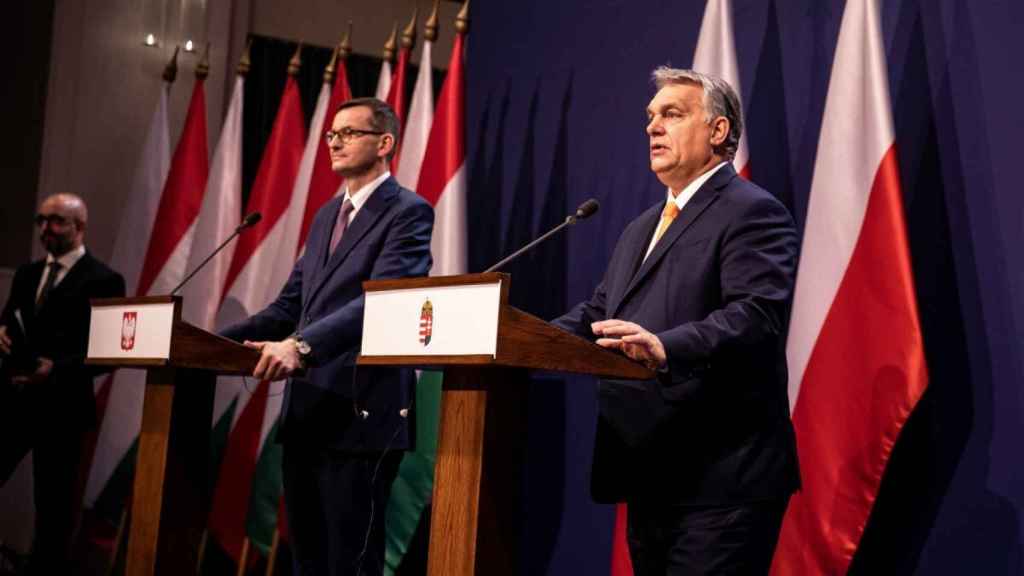 Morawiecki and Orbán, during their appearance after the signing of the Budapest Declaration.

Faced with this attitude, Morawiecki decided that he would not participate in the Visegrad Group (V4), a forum in which Poland, Hungary, Slovakia and the Czech Republic cooperate to defend their interests within the European framework. Although the Hungarian prime minister later condemned the Russian aggression, Orbán has blocked several European sanctions packages on Moscow, which provides him with nothing less than 85% of national gas.

Now the question is to see if, when arms are laid down, Warsaw continues to repair its relationship with the EU or if, on the contrary, it will come back closer to Budapest.

The political earthquake caused by the war in Ukraine has also reached the United Kingdom. On July 7, Boris Johnson gave in to the pressure of his party and announced his resignation. He did it after months of effort to try to cover up national scandals who persecuted him with his unconditional support for the Ukrainian president, Volodímir Zelenski.

Johnson will probably be remembered as the politician who culminated the Brexit process, but also as the one responsible for reopening a wound that was in the process of healing.

Boris Johnson during his speech this Wednesday in the British Parliament.

announce that he was leaving No. 10 Downing Street, the premiere British approved a bill that seeks to annul unilaterally parts of the protocol signed with the European Union on North Ireland which is part of the Brexit deal. An agreement that has the objective of avoid a hard border between Northern Ireland and Ireland.

now Brussels is obliged to restore compliance with the agreement. And for this he will have to negotiate with one of the two candidates who aspire to lead the United Kingdom after Johnson’s departure:Lizz Truss and Rishi Sunak.

whatever whoever wins, the conversations seem tense. Both Truss and Sunak are ardent supporters of Brexit since the campaign of one of the most influential partners of the EU began, back in 2016 to leave the community club.

Pokémon UNITE user? These 2 new gift codes are for you