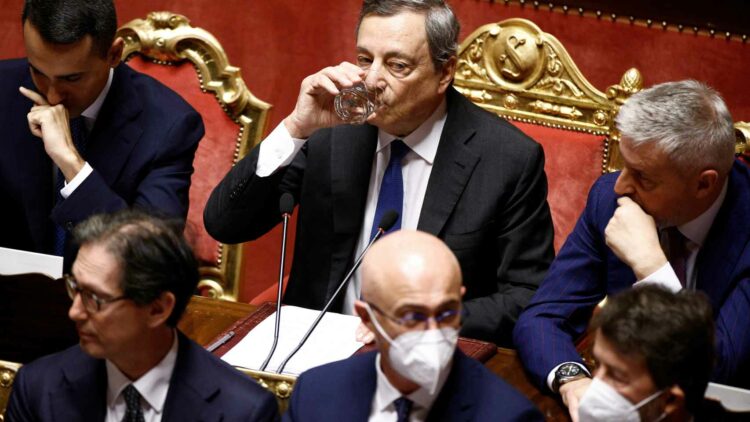 The Italian Prime Minister, Mario Draghilost this Wednesday the parliamentary support to govern, after the abandonment in the Senate of his former coalition partners, the Movement 5 starsthe right of Silvio Berlusconi and the extreme right of Matteo Salvini.

The vote on a confidence motion is still in progress but with the absence of the M5S, force Italy (FI) of Berlusconi and the League of Salvini, Draghi loses the parliamentary majority and the quorum required for the result to be useful may not even be reached.

However, some M5S senators, instead of leaving the chamber, are declaring themselves “non-voting present” so that a quorum can be reached, since the opposite would be unprecedented in a motion of confidence in an Italian government.

The Prime Minister left the Senate after knowing the intentions of his partners and is going to visit the Head of State, Sergio Mattarellabefore whom he resigned last week but who froze his resignation until it is debated today in Parliament.

The Secretary General of the Democratic Party, Henry lettawhich supported Draghi, lamented “this day of madness in which Parliament decided to turn against Italy” and foresaw an early election.

“We have done everything possible to avoid it and support the Draghi government. Italians will show at the polls that they are wiser than their representatives,” he wrote on Twitter.

Draghi has led a coalition of national unity since February 2021 in which almost all the parties in the hemicycle were, except the far-right Brothers of Italy, from Georgia Meloni.

Last week the crisis broke out in his coalition after the M5S did not vote on a confidence motion, distancing himself from the rest of his partners, which pushed Draghi to resign.

However, President Mattarella rejected his resignation and summoned him to seek a solution in Parliament, which began today, but this mission was impossible due to the confrontation between the right and the M5S.

Well, although Berlusconi and Salvini reached out to the prime minister to continue in the coalition, they did so on the condition that the M5S be excluded, something that Draghi was not willing to do, since he aspired to retain the same majority to exhaust the legislature, in March 2023.

The media advance that Draghi will wait for the vote in the Senate to conclude to go to the Roman Quirinal Palaceheadquarters of the Head of State, and address the situation with Mattarella, who would then have the key to the matter.

If Draghi finally formalizes his resignation, the head of state could commission him to seek another parliamentary majority to exhaust the legislature, grant that mission to another technical or political figure or convene elections anticipated.

An option, the latter, especially demanded by Meloni, alone in the opposition and the country’s leading force according to most polls and that Berlusconi and Salvini, his partners in the last elections, see with good eyes.

In recent days, unions, employers, numerous associations of all kinds and even the Catholic Church had encouraged Draghi’s continuation due to the economic, energy and social crisis in progress.

Dalits discriminated against in the parish, complaint to the authorities