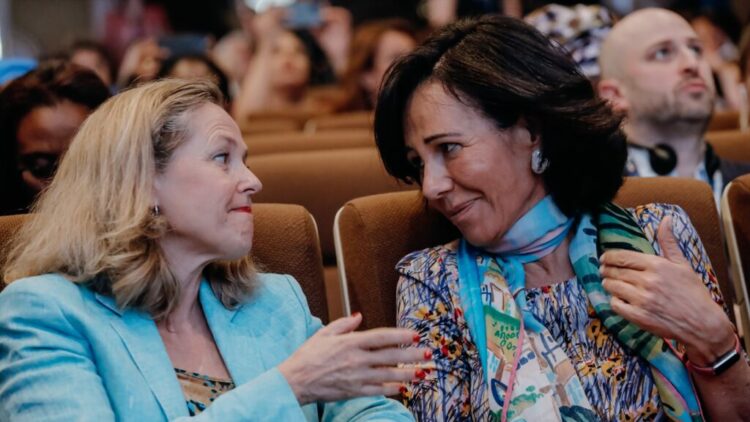 Ana Botin leverage your influence in Europe against the banking tax. The Government’s plans, which intends to tax the typical income of the sector and net commissions at a rate of 4.8%, have jumped the borders of Spain in the middle of August. The European Banking Federation (EBFfor its acronym in English), who has chaired Botín since April of last year, has come out on the step making his own the arguments of the main bankers of the countryalthough without referring directly to Spain.

“Initiatives emerging in some European countries to impose ad hoc taxes on banks are unjustified, discriminatory and, most importantly, fail to address the cost of living crisis,” warned the European banking bosses. A few days before, Gonzalo GortazarCEO of CaixaBank, described the new rate as “unfair, distorting and counterproductive”.

The government has rankled bankers with the tax, which it announced without warning and will still take weeks to pass through Parliament, with a consequent reputational impact. The sector misses a more forceful reaction by the ECB against the new taxalthough the Executive rules out going back whatever the opinion of the sole supervisor.

In a statement, more forceful than the one agreed by the AEB and CECA, the European Banking Federation even resorts to the ECB, which in other similar cases demanded that the new rate would have to measure the impact on the sector and its ability to finance the economy . Precisely, José Antonio Álvarez, the CEO of Banco Santander, warned that the levy to raise some 3,000 million in two years risks granting 50,000 million in loans.

The European banking bosses are more forceful than the AEB and the CECA, with direct appeals to the ECB, the EBA and the benefits that fell from the sky”

In 2019, when Lithuania announced that it would levy a tax on the financial sector, the ECB asked the Government to measure the consequences that it could have for the sector and made its position of opposition clear. At the moment, the supervisor has not referred directly to the Spanish case and it is not clear whether he will issue an opinion (ex officio or at the request of the Government) or whether he will speak out against it, according to sources close to the body chaired by Christine Lagarde .

The European banking employers also appeal to the current banking regulation to refute the Government, which will monitor through the CNMC and the Bank of Spain that entities do not pass on the new tax to customers. “The guidelines of the European Banking Authority (EBA) on the origination of loans indicate that entities must consider and reflect in the price of loans, all relevant costs, including taxes, and consumers ultimately bear the burden of such measures,” warns the European Banking Federation. Both the CEO of Santander and his counterpart at CaixaBank used as an argument against the Executive’s plan the legislation promoted by the EBA.

And as an explicit reference to the Spanish tax, even without mentioning it, the European bank employers clarify that “there are no benefits from heaven”, precisely one of the main justifications of the Government to promote a new rate for banks. “It’s time to put our shoulders to the wheel,” said Nadia Calviño, First Vice President of the Government and Minister of Economic Affairs after meeting with the first swords of the banks to explain first-hand the reasons for the tax. Now, the bank employers respond that the “extraordinary” thing has been the “prolonged” time of negative interest rates in the last eight years.

The tax eclipsed the results of Santander

The partners of the coalition government, the Socialist Group and Podemos, registered in Congress the bill to tax the typical income and commissions of bankswhich overshadowed Santander’s presentation of results, which gained 33% more in the first half of the year.

The bank will throw the rest to try to stop the taxation and will mobilize to seek political allies, such as PP or Vox, to file an appeal before the Constitutional Court or to soften the bill in the parliamentary process, as published Vozpopuli.