130 km of battlefield separate them from the central Zaporizhia 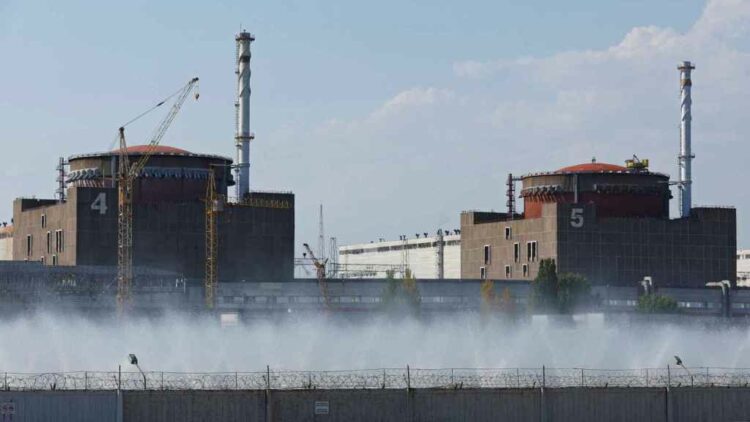 “Avoid a nuclear accident“. That is the objective with which 14 experts from the International Atomic Energy Agency (IAEA), based in Vienna, traveled on Wednesday to the Ukrainian city of Zaporizhialocated on the Dnieper River.

That is not, however, its final destination. They go to the other bank, the eastern one, to inspect the plant Zaporizhia nuclear power plant, the largest in Europe, which in recent weeks has been the scene of fighting between Russian and Ukrainian troops.

They hope to arrive throughout Thursday, but from the capital of the region to the facilities of the atomic plant there are 120 kilometers of road. A distance that, in normal times, would take just over 90 minutes, but that in the context of war can become a long journey of several hours full of obstacles.

A view shows the Zaporizhzhia nuclear power plant in the course of the Ukraine-Russia conflict on the outskirts of the Russian-controlled city of Enerhodar in the Zaporizhia region.

The team of inspectors of the dependent organization of the United Nations (UN) must cross the front line that separates the territory occupied by Russia at the beginning of the invasion in March -where the plant is located- and the one that still resists.

That means getting around the tanks, artillery fire and long-range missiles, because the attacks on the surroundings of the facilities that house six of the 15 reactors that Ukraine has, have not stopped. And there are no signs that they will stop in the next few days. Without going any further, on Wednesday, kyiv accused Russian forces of bombing energizelocated in the vicinity of the plant.

“The situation with such provocations is dangerous,” Evhen Yevtushenko, the Ukrainian head of the regional administration, said on Telegram. The president of Ukraine, Volodymyr Zelensky, also accused Russia in his daily report of not stop the “provocations” in the places where inspectors must pass to reach the Zaporizhia plant.

The day has come, @IAEAorg‘s Support and Assistance Mission to #Zaporizhzhya (ISAMZ) is now on its way. We must protect the safety and security of #ukraine‘s and Europe’s biggest nuclear facility. Proud to lead this mission which will be in #ZNPP later this week. pic.twitter.com/tyVY7l4SrM

For its part, Moscow assured that it had been the Russian troops who had tried to attack the place. with a drone. However, these crossed accusations, which have been repeated for weeks, have failed to dissuade nuclear experts, who are on their way to the Zaporizhia plant to “assess the damage” and “help stabilize the situation as much as possible.”

“We are going to a war zone, we are going to an occupied territory and this requires explicit guarantees, not only from the Russian federation but also from Ukraine,” said the head of the IAEA, Rafael Grossi, who has announced that he has been able to secure those guarantees despite Russia’s refusal to demilitarize the area.

It was the spokesman for the Kremlin, Dmitry Peskov, who, although he described the IAEA mission to Zaporizhia as “necessary”, warned that Moscow is not going to talk about the possibility of demilitarizing the zoneas recently requested by the United States.

The mission of the nuclear inspectors is a “technical mission“, as Grossi has pointed out. And the main objectives, in addition to “avoiding a nuclear disaster” will be to collect real information on what happens inside the facilities (and not what comes from the Kremlin) and talk to Ukrainian operators. Hence that, a priorithis game will last “just a few days”.

Now, according to the head of the IAEA, it is not ruled out that the agency establishes a permanent mission in the plant to control its proper functioning. An idea that Russia’s representative to international organizations in Vienna, Mikhail Ulyanov, has applauded on his Twitter account.

the Russians disappointed by the Chinese