Since the movie announcement Five Nights at Freddy’s Many years have passed, but it was never cancelled. In fact, today more than ever it seems that it will be a reality. Filming will begin very soon and apparently we already know that an actress from a Netflix series will have an important role in the series.

Little by little details of the production of Blumhouse Productions are given. Although we still do not know who will be the actors who will give life to the main characters, it is a matter of time to know them, since filming will start next month, February 2023.

Which actress will Vanessa be in the movie? Five Nights at Freddy’s?

According to Daniel Richtman, a filter specialized in film, the actress Elizabeth Dean Lail will participate in the film to give life to Vanessa. Lail is a 30-year-old actress born in Texas, United States, who has given life to characters like Anna in Habia una vez (2014), Guinevere Beck in you (2018 – 2019), among others.

This character became known in Five Nights at Freddy’s: Security Breacha game that went on sale in 2021. It shows a security guard at a recreational establishment called Vanessa, 23 years old and never seen in the series, although it is known that she was the author of the emails from Five Nights at Freddy’s: Special Delivery with sender name Ness.

In case you missed it: Scooby Doo actor to appear in the movie Five Nights at Freddy’s.

No further official details of this are yet known and official sources have not confirmed Lail’s involvement in the tape. However, unofficially we know that the film will tell the story of Mike (between 20 and 30 years old), who is a security guard at Freddy Fazbear’s Pizzeria to earn money. In the film, he will take care of Abby, his 10-year-old little sister. Both will be leading characters.

“Vanessa is a cop who shows up during Mike’s shift change. Though she possesses radiant leadership and a cheerful personality, she is aware of the restaurant’s dark history and inner workings. Not wanting to give away much of what she might know, she works to help Mike will survive the night,” reads the character description (via Geek Vibes Nation).

Do you think that the choice of this actress is excellent for the role of Vanessa? Tell us in the comments.

The movie of Five Nights at Freddy’s It is in development, but it is not yet known when it will be ready. You can find more news related to this series if you visit this page. 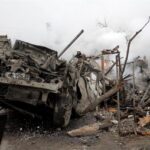