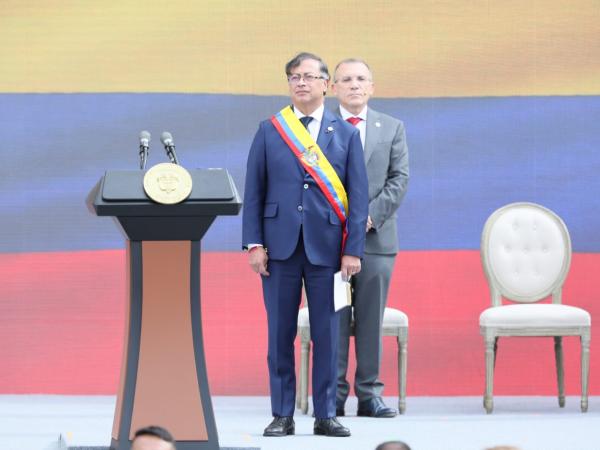 The elected president receives the Presidency of the Republic of Colombia with an economic environment “rarefied”, inflation in two digits (10.21%), something that has not been seen for 22 years, a high interest rate (9%), as a monetary policy response to the rise in the consumer price index (CPI).

(See: Inflation in Colombia returned to double digits after more than 22 years).

Gustavo Petro will arrive at the Casa de Nariño also to face a complex international scenario, marked by the conflict in Ukraine after the Russian invasion, threats of recession in large economies, and a situation of high prices in supply chains.

With a dollar at $4,337 and a barrel of crude at US$94.56, the incoming government will be doing its first accounts. Although the fiscal situation has improved in recent months, it will have the challenge of reducing the level of debt, which is at 56.1% as a proportion of gross domestic product (GDP).

Despite this, the economy presents an encouraging outlook. During the first half of the year, GDP grew 8.5%, and in a week the data for the second semester will be known, which is expected to be positive, if the figures of the economic monitoring indicator (ISE) are taken into account. Through this, economic activity showed growth of 12% in April and 16.5% in May.

At the sectoral level, trade and industry, especially, have been dynamic. The first registered a 34% growth in its sales in May, compared to the same month of 2021, when the national strike occurred, and the second saw an increase in production of 46.2%. Tourism is another sector that has recovered significantly, with hotel occupancy already reaching 50%.

In terms of foreign trade, exports closed the semester with a rise of 107.5% in June.

Gustavo Petro is sworn in as president.

Although the economy has been sailing at a good pace in the midst of a stormy scenario, the social indicators represent an even stronger challenge for the new government.

Regarding the labor market, progress is still needed so that the unemployment rate, which closed the semester at 11.3%, returns to single digits.

(See: Colombia, among the economies with the highest risk of ‘default’).

In the country there are 2.79 million unemployed and in the case of the youth population, 2.88 million young people do not study, but do not work either, according to Dane.

Although the informality figures have been reduced as the labor market has recovered from the pandemic, the rate of informal workers was 44.70% in the March-May 2022 quarter, the latest data available.

about poverty, The Government will make its calculations with the 2021 indicators. The monetary poverty figure is 39.3% of the population, that is, 19.62 million people live with less than $354,031 a month, and in addition, 12.2% of the population lives in a situation of extreme poverty, or indigence.

(See: These would be the biggest challenges that the Colombian economy will face).

They fight against a gigantic fire at the supertanker base in Matanzas, Cuba