‘The fiscal adjustment is not complete, it is up to us to complete it’ 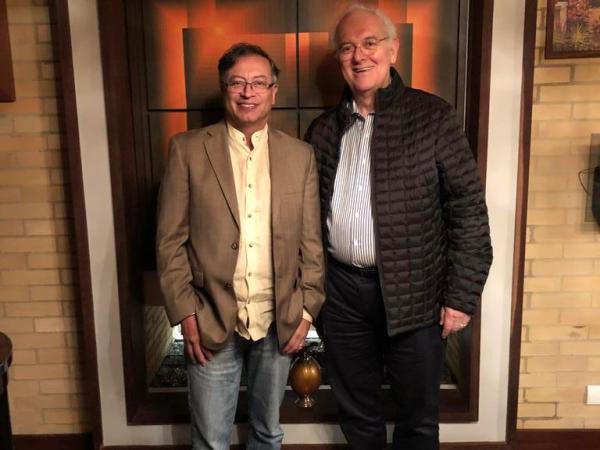 The economist José Antonio Ocampo, appointed by the President-elect, Gustavo Petro, as his Minister of Finance and Public Credit, is no stranger to the portfolio, since he held the position between 1996 and 1997. Now, he returns with a mission: to approve an ambitious reform tax, of at least 5 percentage points of GDP, to leverage needs in social spending, but without sacrificing fiscal stability.

(Who is José Antonio Ocampo, Finance Minister of the Petro government).

Ocampo spoke with Portafolio about what that reform will be like, about the vision he has in relation to oil revenues, his perception of the economy left by the current government, and the challenges in the outlook, such as inflation, high interest rates, and winds of recession in the US.

How much do you expect to collect per year with the reform?

It is very difficult to determine at this stage, as we are estimating different alternatives to see how much could be raised. It is impossible to say at this time how much it would be. The goal throughout the government is to gradually get closer to $50 billion. The initial impact will be a bit more moderate.

What will be the main points of the reform?

The basic problem of the Colombian tax system is that the income tax on natural persons has very low collections, such as 1.2% of GDP, against more than 8% in an OECD country. For us, the most important thing is to significantly increase income tax collection for natural persons, and for this, the objective is to eliminate tax benefits from Colombian legislation, for people with higher incomes, with more than $10 million per month, which is the 2 % of highest income in Colombia. That is the focus of the reform.

In the case of companies, we are also thinking of eliminating some benefits, if we are successful, with the aim of gradually lowering the tax rate of companies. We have to see what we achieve in additional collections to achieve that goal.

In VAT there are very few changes, the most important is the elimination of days without VAT.

How do you see the current corporate rental rate?

It is very high by international standards. It must be reduced and hopefully we can do it.

That was a campaign issue. We are basically thinking of those who earn more than $10 million per month, that is the goal. In a study carried out by the OECD for Colombia, it is seen that in the highest range effective collection as a proportion of income tends to fall, we have to see how we correct that.

From other portfolios there has been talk of taxes on telephone plans or sugary drinks. From the Treasury, how do these proposals look?

We are going to include taxes on sugary drinks and ultra-processed foods. Not necessarily for a tax revenue issue, but to improve eating patterns. In fact, if those taxes are effective, the collections tend to decrease when people change their consumption patterns.

On the other hand, the cell phone thing if we are not going to change it.

One of the main sources of income for the Nation is oil revenue. If future explorations were to be suppressed, how would those revenues be compensated?

We have a clear goal of diversification, energy, export and production. On the specific issue of oil and gas, the president-elect himself acknowledges that we have very low gas reserves. He has also said that the 180 signed exploration contracts will be respected and we have to see what can be done with them, to see how much they guarantee in terms of additional reserves. Once that review is done, we’ll see. But it is absolutely clear that Colombia has to continue exporting oil, because we cannot substitute it so quickly.

How to maintain the stability of public finances in this scenario of energy transition?

Oil will continue to give important income to the country, this is not in the short term. The important thing is to carry out a tax reform that allows us to increase tax revenues, with the dual objective of increasing social spending, in accordance with the commitments made by the president-elect in his campaign, and completing the fiscal adjustment, which is still incomplete .

The president-elect spoke about the composition of Ecopetrol’s board of directors. Will the government modify it?

The Duque administration made the mistake of appointing the board for four years in March of this year, which in a nutshell is practically for the entire next government. We are going to make changes, keep some members, appoint others, and return to the two-year system, as it was historically.

You get a dynamic economy, but with dark clouds on the horizon, what does it take to sustain that pace of growth?

The recovery of the Colombian economy has been very positive, but the exceptional growth in recent months is not an appropriate way to analyze the data, because it is compared to the worst quarter of last year, due to unemployment. The recovery is going well, but the Duque government itself predicts that it will slow down in the second half.

(‘We have to continue exporting oil’: Ocampo).

On top of this are the international storm clouds, which are getting worse every day. Recent figures from the US, the European Union, the UK and China show a very sharp slowdown in the global economy. This is due to high inflation due to supply problems that had started last year, but worsened with Russia’s invasion of Ukraine, and which has caused all the world’s central banks to raise interest rates. We inherited a complex situation, of a slowdown still with high inflation and high rates.

The government increased social spending due to the pandemic, this has a fiscal impact. How can it be maintained, and even increased?

Are you worried about the depreciation in the peso?

The factors that are behind are basically international, in addition, the exchange rate grows in all the countries of the world, it is the strengthening of the dollar against all other currencies, even against the euro, the pound sterling and the yen. It is a factor that also has to do with the expectation of an increase in interest rates by the Federal Reserve and in the US in general. Crises bring money to the US, because it is considered a safe place to keep these resources. In the Colombian case, as I said when the exchange rate began to explode, “it is a typical speculative process and you will see that it begins to fall”, and indeed, it has moderated, but it is still depreciated, like many other currencies in the world. .

In some way it generates an inflationary impact, but in the case of Colombia that impact has always been very moderate, and on the other, it is an opportunity for national production, if you want to see it. It is exporting more and being able to compete better with imports, this type of exchange can have a positive effect on productive activity.

There are fears of a recession in the US, how can Colombia protect itself?

It is not possible to shield oneself, no Latin American country can. We have some strengths, such as a huge level of international reserves, a flexible line of credit from the International Monetary Fund approved for a good amount of resources…

These two factors are very positive, but shielding oneself against an international crisis is something that has never been possible.

Inflation is another problem, what will be your strategy to attack it?

To begin with, we are going to see the high interest rates that the Banco de la República is generating and how they are reflected in the reduction of inflation versus the acceleration of productive activity, which is the big question for the coming months. The basic issue that fights inflation is that.

In the short term, the only thing that can really be done is to support poor households with additional resources due to high food prices, and on the other hand, to support national food production. I believe that it is a great opportunity, and we hope to organize well the way to support greater sowings of agricultural products.

As Minhacienda will return to the Issuer’s board, what do you think of the current monetary policy?

If you ask me, I would have always sided with the slightly more moderate increase, but on the other hand, the Banco de la República had to increase rates, both because of inflation and because of international trends. The Bank has been with very few margins, but I would have been on the side of a little more restraint.

How do you evaluate the state of the economy you receive? What is your diagnosis?

In terms of productive activity, the economy is doing well, it has recovered, but the slowdown is inevitable, due to the international context, and also because the national context does not allow for growth rates as high as those we have had these quarters. Inflation remains high, interest rates are on the rise, and for example, for public sector financing, TES are at one of their highest levels in a long time.

Employment has recovered, but not for young people and women, and additionally, with a high degree of informality. In poverty, last year’s level was higher than before the pandemic, and even monetary poverty began to increase earlier, in 2019.

José Antonio Ocampo is an economist and sociologist from the University of Notre Dame (USA), and has a PHD in economics and political science from Yale University. At the national level, he has been Minister of Agriculture, Finance and Director of National Planning and also co-director of the Banco de la República. He was also director of Fedesarrollo.

Internationally, he has been executive secretary of the Economic Commission for Latin America and the Caribbean (ECLAC), Assistant Secretary General for Economic and Social Affairs of the UN and had been teaching at Columbia University (USA).

Hearing focuses on what Trump did while mob stormed Capitol