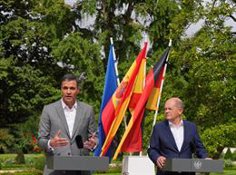 The Government of Italy has decided to extend until October 5 the bonus of 30 euro cents on fuel prices that has been in force since March and has been renewed as the expiration dates approached.

In the week that was from August 22 to 28, fuel prices registered an increase compared to the previous week, according to data from the Ministry for Ecological Transition. The average price of gasoline reached 1.761 euros per liter, 0.7% more than the previous week. On his side, diesel rose by 3.69, to 1,808 euros.

"The mission is to avoid a nuclear accident"