‘I will develop the popular economy, the industry and the countryside’: Petro 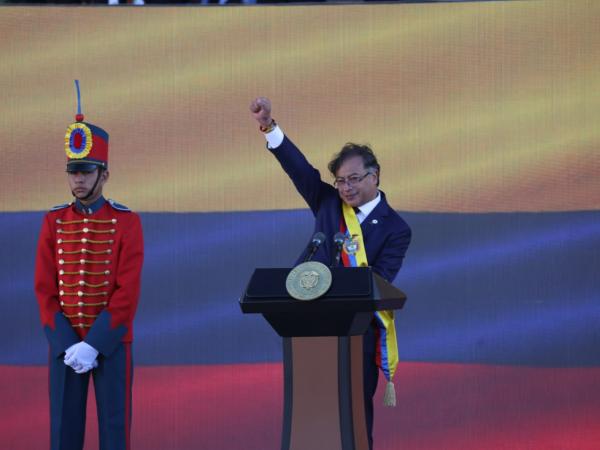 This Sunday, August 7, the first left-wing president of Colombia arrived at the Casa de Nariño. Gustavo Petro He positioned himself not before without asking for the arrival of Bolívar’s sword, which represents a symbol of resistance for those who fought in the M-19.

(Read: Half the country demands change and the other half, stability and balance: Roy).

Although former President Iván Duque had disavowed the presence of the sword, during the swearing-in of Vice President Francia Márquez Petro requested that they take her to the Plaza de Bolívar.

“Lbequeathing here with this sword is a life. It means a lot to us. I want it never again to be buried or held”, began the president. In his speech he highlighted several issues that will be a priority in his government. Several of them of an economic nature.

If we are able to take part of the wealth that is created to children with malnutrition, we will be more just and we will be at peace. It is not a matter of charity, it is of human solidarity

In principle, he highlighted the problem of drug trafficking in the country. For Petro, peace is only possible if change drug policy. “It is time for a new international convention that accepts that the war on drugs has utterly failed. It has left 1 million Latin Americans murdered, most of them Colombians, in these last 40 years”, he said.

For the president, the war on drugs strengthened the mafias and weakened the States.

In turn, he expressed concern about the social and economic inequality who lives in the country. “10% of the Colombian population has 70% of the wealth, it is nonsense. Let us not naturalize inequality and poverty. It is not true that in the other countries of the world there is this inequality that we have in Colombia. We are one of the most socially unequal societies on the entire planet,” she pointed out.

For this reason, it seeks to propose a series of redistribution policies and a justice program for a more egalitarian country with opportunities for all. “Equality is possible if we can generate wealth for all and distribute it fairly,” Petro assured.

Along with this, he mentioned the construction of a economy based on production, work and knowledge. For this, a tax reform that generates justice is proposed. “Taking part of the wealth of the people who have the most for the education of children and youth should not be seen as a sacrifice. It is a solidarity payment,” he said.

The president also mentioned a problem that is increasing in the country: the desnutrition. “If we are able to bring part of the wealth that is created to children with malnutrition, we will be more just and we will be at peace. It is not a matter of charity, it is of human solidarity,” assured the leftist leader.

(Also: The oath of Gustavo Petro in his presidential possession).

For Petro, solidarity is the tax paid by those who can and the state spending on those who need it. “State spending is not for the political mafias, it is for the people of the town,” she said.

In his speech, he also mentioned the reforms that he will make in his government: health, pensions, taxes, education and labor contract. “HWe have prioritized in the budget the infrastructure of education, health, drinking water, irrigation districts. Taxes will not be confiscatory, just fair”, said the leader of the Historical Pact.

Likewise, Petro made a strong criticism on international trade: “It is neither positive nor negative, but if it is not handled intelligently it can destroy economies and lives. The world today learns the importance of food sovereignty, which is the guarantee that every society should have”, he said.

That is why one of its objectives to have food sovereignty so that hunger in the country is zero. A goal that is set in partnership with the private sector. “The State will have to provide irrigation, improved seeds, techniques and others to ensure that the food that is needed is produced again in the countryside,” he said.

In turn, he said that from now on the goods in p-domain quenchingThey will become part of the country’s productive economy and will be administered by certain peasant and women’s organizations.

Another of the flags of his government will be close gender gaps. “We are not going to allow women to have fewer job opportunities or earn less than men, nor that they have to spend more time on care work,” she asserted.

The environmental issue was a pillar of his speech. Peter spoke of climate changereferring to the search for an economic model that is sustainable.

“We are willing to transition to a carbon-free and oil-free economy. It is not us who emit greenhouse gases, it is the rich of the world. But we do have the largest sponge for absorbing these gases: the Amazon rainforest.”, he explained.

(Keep reading: These were the last words of Iván Duque as president).

Given this, he proposed swap foreign debt for domestic spending that allow saving and recovering the forests and wetlands in the country. “It is time to encourage oil and energy companies to focus on the renewal of clean energies and the transmission of these on an international scale. I will seek to reach ambitious agreements to stop climate change”, he pointed out.

In terms of security, he said he will defend the politics of life. “Security is not measured in deaths, it is measured in lives,” Petro said.

Finally, at five in the afternoon, the president left the Plaza de Bolívar with his wife and daughters. “We have a second chance under the skies of Earth.”was the closing of his speech before more than 7,000 people in the Colombian capital.

Cuba receives help from Mexico and Venezuela to control fire