Taking John the Baptist as an example, Pope Francis invited at the Angelus to reflect on the importance of learning to “step aside” for educators. He also announced an ecumenical vigil with the Taizé Community for September 30 on the eve of the start of the Synod.

Vatican City () – The true educator is one who is capable of “stepping aside” to make room for Jesus, Pope Francis told the faithful gathered in Saint Peter’s Square for the Sunday Angelus prayer.

Pope Francis commented on what the evangelical text that today proposes the liturgy on John the Baptist says after the Baptism of Jesus: “He was sent to prepare the way for the Messiah, and he did it without sparing any effort. Humanly speaking, one might think that they would give him an “award”, a relevant position in the public life of Jesus. But not. Once his mission is accomplished, John knows how to step aside, he withdraws from the scene to make way for Jesus”. John – continued the Pope – “does not bind anyone to himself. And this is difficult but it is the sign of the true educator: do not tie people to yourself”. He teaches us freedom regarding attachment to roles and positions, the need to be valued, recognized and rewarded, because “service implies gratuitousness, taking care of others without advantages for oneself, without second ends”.

“Let’s think about how important this is for a priest – he continued – who is called to preach and celebrate not out of a desire for prominence or interest, but to accompany others towards Jesus. Let’s think about how important it is for parents, who raise their children with many sacrifices and then must leave them free to follow their own path at work, in marriage, in life. It is beautiful and fair that parents continue to ensure their presence by telling their children: ‘we are not going to leave them alone’; but discreetly, without intruding. And the same goes for other areas such as friendship, life as a couple, life.

That is why he invited us to ask ourselves: “Are we capable of giving space to others? Do we attract others to Jesus or to ourselves? Are we capable of rejoicing when people follow their own path and follow their call, even if this implies a certain detachment from us? Do we rejoice in their achievements, sincerely and without envy?

At the end of the Angelus, Pope Francis then recalled that the Week of Prayer for Christian Unity begins on January 18, and that this year’s theme is the invitation of the prophet Isaiah “Do good, seek justice.” . “Let us ask the Holy Spirit -he said- to enlighten us and sustain us with his gifts”. Then, highlighting the link between the ecumenical path and the synodal path that the Church is following, he announced an ecumenical prayer vigil on September 30 in St. Peter’s Square, organized by the Taizé Community with young people from all Christian confessions. It will be a moment – explained Francis – in which “we will entrust to God the work of the XVI Ordinary General Assembly of the Synod of Bishops”, which opens the following day on the theme of synodality. Finally, Francis once again invited not to forget the suffering of the Ukrainian people and to persevere in prayer for peace. 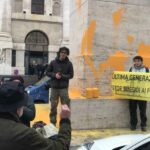