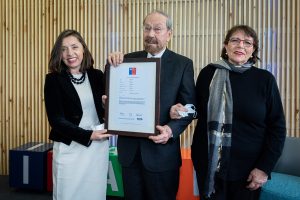 The chemical civil engineer, doctor in metallurgical and academic of the Faculty of Engineering of the University of Concepción, Igor Wilkomirsky Fuica, added the registration of a new invention patent before the National Institute of Industrial Property (INAPI), who in a ceremony presented him with this license, as well as recognition for his contribution to the scientific world, since he is the Chilean with the largest number of innovations protected at the national level, where to date it maintains 17 current records.

The last job of the FiUdeC academic who triggered this new patent consisted of leading a team of researchers from the Department of Metallurgical Engineering of the UdeCwhich developed a system for processing copper concentrates, using green hydrogen, which promises to have a zero carbon footprint and even produce surplus clean energy, since it eliminates all use of fossil fuel and has high levels of energy recovery, being a strongly exothermic process.

The activity was carried out in INAPI facilities in Santiago and was headed by the National Director of the entity, Loreto Bresky Ruizand the Rector of the University of Concepción, Dr. Carlos Saavedra Rubilarwho were together with UdeC authorities and academics and representatives of the mining sector.

In her speech, the National Director of INAPI valued the work carried out by Dr. Wilkomirsky, emphasizing that “we wanted to recognize him because he has developed green technologies, which It is one of the strategic areas that we are promoting from INAPI and that this is particularly relevant today for the country”, in addition to considering his work as an example for the national ecosystem, “which is why it is very relevant for INAPI to recognize his trajectory and the example he represents for other researchers and future generations” .

The Rector of the UdeC thanked the work carried out by Dr. Wilkomorisky, his contribution to the community and new generations of students, also highlighting his latest patent that uses green hydrogen, since “there are not many technological unicorns that arise from the academy in our country and we are absolutely convinced that this is one of them and that with the support of the private sector, the academy, but also the State institutions, we will be able to materialize this opportunity in an effective contribution to the development of our country”.

“I have had all the opportunities”

The academic had a pleasant and close dialogue with the attendees, to whom he related his experience in the development of new technologies, especially what he had done in his latest work, where he expressed feeling proud and grateful “both for me and for the University of Concepción, since I have done a large part of my career in this house of studies, where I have had all the opportunities to develop these ideas. Some of them have ended up in patents and we hope that more than one will materialize in companies or applications, for the benefit of Chilean society and the national economy”.

The teacher is also candidate for the National Prize for Applied and Technological Sciences 2022for its contribution to mining, based on various technological developments in the metallurgical area that point to the sustainability of an industry that is key for Chile and for the world, in an era marked by the fight against climate change, where minerals and metals such as copper and lithium are strategic for the energy transition and decarbonisation.

This was also highlighted by the Dean of the Faculty of Engineering of the UdeC, Dr. Pablo Catalan Martinezsince “the contributions made by Professor Wilkomirsky are closely linked with new sustainability processes, improvements in productivity, and particularly, the adaptation in the evolutionary processes of the mining industry towards new paradigms, which allow us to think about the construction of new technology-based industries”, he stated.

The work carried out by Dr. Wilkomirsky together with a team of researchers from the Metallurgical Engineering Department of the UdeC consists of creating the copper processing through an oxidation stage, followed by a reduction with green hydrogen, which replaces the traditional copper smelters. With this new technology, a new paradigm is created that applies a circular economy approach, without S0 emissionstwo and without slag residue It takes advantage of all the concentrate and produces anodic copper, recovers molybdenum, generates iron in the form of magnetite, which is a key input for the steel industry, and also creates a high-quality silica concentrate.

Due to its state of progress, the innovation is close to starting a scaling process, which implies carry out tests in a pilot plant that will be implemented at the University of Concepción. Subsequently, an industrial demonstration will be held at a mining site, for which negotiations have begun with potential partners from the mining sector and investors.

Guterres urges oil companies to be taxed for their excess profits