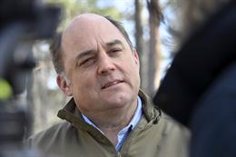 Authorities in the self-proclaimed Donetsk People’s Republic (DPR) in eastern Ukraine have accused the UK government of encouraging its citizens to take part in the war but later disregarding their health. .

As explained by the pro-Russian governor of the DPR, Denis Pushilin, the British government first “pressures” its citizens to go to the war in Ukraine but then, when they are arrested by the Donetsk authorities, they do not send appeals.

“On the part of the state institutions of the United Kingdom there have been no requests or complaints regarding their citizens. That is, no interest is shown,” Pushilin criticized.

On June 9, the Supreme Court of the self-proclaimed Donetsk republic sentenced British citizens Aiden Aslin and Sean Pinner, as well as Moroccan Sadun Brahim, to death for participating as mercenaries for the Ukrainian Army.

Pinner and Aslin were arrested in mid-April in Mariupol, while Brahim was killed in an operation by Russian forces on March 12 in Volnovakha.

Pushilin added that the Moroccan authorities have not contacted DPR officials either, although he confirmed that Brahim’s relatives did try to contact the pro-Russian authorities in Donetsk.

According to the Russian authorities, almost 7,000 foreigners from more than 60 countries have joined the Ukrainian forces to participate in the conflict since it began in late February, more than a hundred days ago.