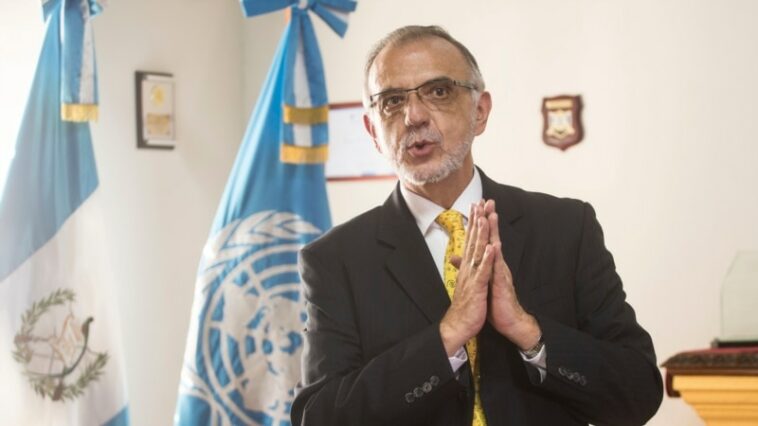 When the Special Prosecutor’s Office Against Impunity (FECI) reported on Monday that would take action against the Colombian Defense MinisterIván Velásquez, different questions were raised related to the origin of this accusation and the tension that was generated between both countries that, in the eyes of analysts and political experts consulted by the voice of americait will end up being channeled however.

The Velásquez’s relationship with Guatemala It dates back to the time when he became head of the International Commission against Impunity in Guatemala (CICIG), in 2013.

There, the current minister investigated cases of corruption in the Central American country until 2017, including the Odebrecht network in Guatemala, where it was shown that there were payments for awarding highway construction contracts, in which senior officials were involved.

In addition, In 2015, the CICIG published the investigation of the ‘La Línea’ case, which exposed how importers bribed brokers, including government officials. The findings touched deep fibers of the Guatemalan political class to the point of generating the resignation of Vice President Roxana Baldetti and achieving the fall of former president Otto Pérez Molinathen dotted with corruption.

Then, in 2019, President Jimmy Morales considered Velásquez as a person non gratayou prohibited entry to the Central American country and refused to renew your visa. Now, the government of President Alejandro Giammattei has gone one step further when taking legal action against the Colombian.

For Wilson Sandoval, lawyer and coordinator of the Anti-Corruption Legal Advice Center of El Salvador (ALAC)), The tension that has been arising between the two countries “is closely related to the situation of corruption in the Northern Triangle, especially with Guatemala.”

It is closely related to the situation of corruption in the Northern Triangle, especially with Guatemala”

The work of the CICIG, says Sandoval, “had real repercussions in Guatemalan society and, especially, in the face of the elite in Guatemala that has traditionally held power in that country,” generating “discomfort.”

Iván Velásquez is not the first person, related to anti-corruption plots, who is being investigated.

Ana María Méndez Dardón, director for Central America at the Washington Office for Latin American Affairs WOLA (for its acronym in English) speaks of a “hunt.” “There has been a decline in which a wave of criminalization has started, of attacks on independent justice operators and human rights defenders in Guatemala,” she explains.

According to the WOLA spokesperson, there are 35 people in exile, including former Attorney General Thelma Aldana, who worked hand in hand with Velásquez; the magistrate of the Constitutional Court, Gloria Porras; and Claudia Paz y Paz, who was also the attorney general of the Central American country, as well as former FECI and CICIG prosecutors.

For Méndez, from the analysis they do at WOLA, they speak of parallel structures within power. So, “when CICIG leaves, these structures once again establish themselves and… Giammattei and his political party are part of this strategy, of these illegal networks that seek nothing more than to continue capturing justice in Guatemala.”

Valeria Vásquez, analyst for Central America at Central Risks, assured the VOA that “today in Guatemala there is no judicial independence. The government of Alejandro Giammattei is carrying out this type of persecution, there is a lot of political interference in various cases of investigation against judges, against anti-corruption prosecutors and let’s say that this investigation is going that way.

In this sense, the lawyer affirms that the situation with Minister Velásquez is “a message from the Guatemalan elite that anyone who tries to combat corruption schemes in that country will be persecuted.”

In addition, he recalled that those who have promoted this investigation against the minister -prosecutor José Rafael Curruchiche Cucul and Guatemalan Attorney General Consuelo Porras– have been included in the United States Engel Listfor corruption.

However, when asked if criminal organizations have purchased Guatemalan officials, the Guatemalan president said on Thursday, in interview with the Spanish newspaper The reason, that “there are mayors accused of belonging to these groups, but also police officers and communities that prevent the Army from passing to prevent the unloading of an aircraft. That is also corruption.”

And he added that as long as there are “governments that allow their banks to receive money from organized crime” they do not have “enough face” to point out that they are corrupt. “There are many people in the world who should first wash their mouths before talking about another country,” the president emphasized.

In conversation with the VOAAlejo Vargas, professor and director of the Department of Political Science of the National University of Colombia, said that he hopes that with the intervention of the foreign ministries of Colombia and Guatemala the conflict “will go in a progressive logic of improvement and normalization.”

After the Guatemalan Prosecutor’s Office pointed to ex-commissioner Velásquez, the Colombian president called his ambassador for consultationsand Guatemala responded in kind.

“The call for consultation is a mechanism that is widely used in international relations, and is used by governments to express annoyance about a decision or concern about a measure. This figure, on occasions, is a predecessor of measures of greater depth, as properly withdraw the ambassador for a while,” explains Vargas.

But, according to the professor, the tension may not reach that point, because even if both countries do not have a strong economic relationship, “these impasses can easily be overcome,” he says.

Lawyer Sandoval believes that the actions of both presidents in the case provide important guidelines for the future of the conflict.

“The president of Colombia has made it clear that there would not be much to do in the relationship with Guatemala, if they continue with the persecution against Defense Minister Iván Velásquez,” he opines in an interview with the VOA. “In that sense, what this could escalate to is cooling more than what is already between Guatemala and Colombia.”

It also adds that Guatemala’s credibility is at stake, since if the tensions continue “it would project an image of being a country that does not persecute its own for corruption, but rather those who have been defenders of the rule of law in the region”.

For his part, Méndez Dardón recalls that the CICIG mandate established that officials enjoyed immunity during and after their duties, so an investigation against Velásquez would make no sense. Rather, it would serve to make visible the political situation that Guatemala is going through.

“The setback and deterioration in that country has been immense. From various organizations we speak of the term ‘authoritarianism’ because that is exactly what is happening in Guatemala. We do not know if the conflict is going to escalate or not, but what we do know is that highlights what Guatemala has become,” he explained to the Voice of America.

On Friday, the Guatemalan president assured that your country will respect the diplomatic immunity of the minister and told the Colombian radio station the w that, “even if he has committed a crime, the man cannot be prosecuted, but he must be investigated.”

Regarding the diplomatic tension, the WOLA spokesperson emphasized that “instead of generating those fissures that probably already exist” this can serve to Colombian President Gustavo Petro“could play an important role in making this situation visible and in fact supporting the Central American region to counter all these authoritarian practices that are on the rise.”

As for trade relations, Vásquez sees “a break in relations as highly unlikely” because Guatemala receives export products from Colombia.

And he believes that the issue “is not being handled through diplomatic channels and that the next few days will be very important” for both countries and that it will depend on the pronouncements of their presidents.

The position of the Guatemalan Prosecutor’s Office

In addition to the announcement against Velásquez, the Guatemalan Prosecutor’s Office is investigating the lawyer Luz Camargo Garzón, who worked as an investigator of corruption structures in Guatemala.

According to the prosecutor in charge, Rafael Curruchiche, the first investigations show that the former commissioner and the official had “full knowledge of the dark and corrupt negotiations that were taking place with the Odebrecht company.”

Curruchiche assures that the former CICIG commissioner endorsed illegal agreements with two directors of the Brazilian construction company Odebrecht, and after allegedly appearing in emails together with the directors, Curruchiche believes that they knew of the company’s negotiations.

Faced with the pronouncement of the international community in the case, the Prosecutor’s Office assures that the Public Ministry is an independent and autonomous institution, and that “trying to influence its investigative work weakens the rule of law” in that country.

Through a releasethe Guatemalan institution “urged” the national and international community to “be respectful of the rule of law, democracy and the principle of legality” in Guatemala, noting that no actor can intervene in their processes.