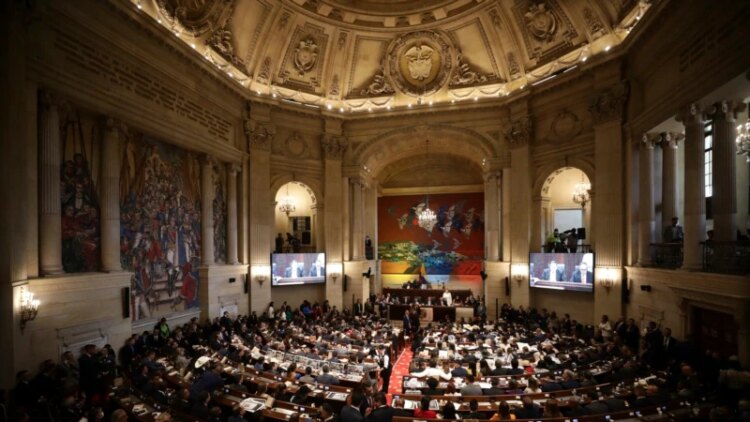 On Wednesday, the new Congress was installed in Colombia, which will have certain innovations, such as an unprecedented left-wing caucus, a broad government coalition, almost two-thirds of new faces and it will be the first time with the highest number of women congressmen and members of the LGBTIQ+ community.

“Today I am proud to say that there is a new Providence,” said President Iván Duque, in charge of making the installation of the Legislative official.

The legislators, who were elected in March this year by popular vote, will meet for the next four years. There are 294 congressmen in total. Most of them, 181 are new and 113 have already carried out this work in previous periods.

Around 28.5% are women and seven seats will be occupied by the LGBTIQ+ community.

The president took advantage of the installation of the ordinary sessions of the Congress of the Republic 2022-2023 to take stock of his government, such as the approval of the Climate Action Law, approved unanimously by Congress and stressed that “security, as a democratic value, It has guided us to reduce the average homicide and kidnapping rates in a four-year period to their historical minimums.”

“Drug trafficking, coca crops, corruption and illegal armed groups have been the true enemies and those responsible for the murders of our social leaders,” lamented Duque. “It is a reality that fills us with pain.”

Challenges of the new administration

The president-elect Gustavo Petro will assume command of the South American country on August 7. Among the most important projects for this year, which must have the support of Congress, are tax, political and agrarian reform.

The first of them intends to raise 50 billion pesos and is the one that will allow raising the resources to finance the social programs and the reforms proposed by Petro.

So far, the new government has a coalition made up of the Historical Pact -the party in which it is a member-, the Esperanza Center, the Liberal Party and some minorities, but for the first time in the history of Colombia that a leftist party will govern. and that a coalition around her assume control in the legislature.

However, the parties have until September 7 to decide if they are part of the opposition or what position they take against the new government.

On the other hand, the congressmen of the political movement of the elected president announced on Tuesday an initiative to reform the Colombian Congress that has already failed in the past.

The initiative includes reducing the salary of congressmen, reducing vacations, increasing the causes for which congressmen can lose their position and limiting the reelection of congressmen to three terms.

“We have a long history of failure. Now, we have a new Congress that has majorities that are agreed around a government program that has as its central point the fight against corruption,” said Senator Iván Cepeda, of the leftist Historical Pact.

According to the accounts of the Historical Pact, in the past 13 bills have been sunk that sought to reduce the salary of congressmen, four more that sought to modify vacations and another five that hit absenteeism.

“It is a litmus test for the parties that in the past opposed this type of project and that today make up the government bench… we will know if their intention is sincere or they are simply here to maintain some privileges,” the senator warned. Gustavo Bolívar, from the Historical Pact and very close to Petro.

The congressmen who champion the proposal are still defining the magnitude of the reduction in wages and its entry into force. Currently, it is about 7,800 dollars a month, more than 30 times the minimum wage for a worker in the country.

The causes of loss of investiture would also be increased, the sanction with which congressmen are punished when they are removed from office. It would be applied in the event that congressmen accumulate more than six unjustified absences from their work in the capitol, as well as when they receive “bureaucratic benefits in consideration for their participation or not in the discussion and voting” in Congress.

Project GG is yet to debut, but PlatinumGames is already working on an ambitious new IP