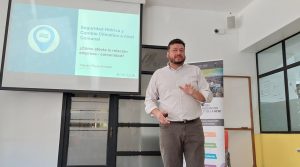 Claudio Reyes, forestry engineer, presented at the seminar “Water security and climate change at the community level. How does it affect the relationship between the company and the community?».

Analyzing the effects generated by climate change, stressing the ecosystem, was the axis of the presentation made by Claudio Reyes, forestry engineer, graduate in Planning and Management of Water Resources in the face of Climate Variability and Change, and candidate for a Master’s in Management and Environmental Planning of the University of Chile, during the Seminar “Water security and climate change at the community level. How does it affect the relationship between the company and the community?” which was held in the Study Room of faceSan Andres Campus.

The event was organized by the institutional projects 68-InES and OTL 210016 financed by the National Agency for Research and Development, ANID.

The expert affirmed that climate change stresses the availability of resources, particularly water, which affects the way in which people carry out their lives, generating a gradual degradation and migration of people from the countryside to the cities and others who leave the cities. to return to rural life.

“This cross flow causes a conflict at the territorial level and this change scenario causes risks for companies, because these changes bring impoverishment, purchasing power falls and the seed of the social spark increases, because when people see that the company no longer it works for it, because it does not respond to its needs, it loses the permission of having forestry or electricity companies”, he gave an example.

It may interest you: Call 2023: we are looking for scientists who want to be part of the popularization book 100 scientific illustrations

Therefore, Reyes believes that it is necessary to adapt, because it is a phenomenon that is occurring at the national level. Last year, the ten communes of the large island of Chiloé suffered from water shortages, an area where it continues to rain, but in a different way, as in other parts of the country, which puts the system to the test.

With all this, it is necessary for the basins to function, because this is how ecosystem services are produced, such as having water, wood and different things, but since it will not operate at the same rate, adaptation is key, such as having rainwater harvesting systems , deepen the aquifers and be more efficient.

“In this we are 15 years late, but we must do something. Climate change is not going to go backwards, it will get worse and worse and if we don’t adapt, many people will have a very bad time and when that happens, we already know what happens ”, he stressed.

For her part, Paulina Medina, academic coordinator of Continuing Education and Services of the Science Faculty, indicated, as a balance, that the seminars were very beneficial for the University. “We are very happy with the impact that this cycle had, such as the seminar on the role and participation of women in water resources, where we showed cases in which the low female participation in this area was reflected, which must change in the future. time,” he said.

In addition, he said that as a goal they set themselves to incorporate more academics into the program, because that way there will be greater participation in the water issue, because better results are given.