Lima (AFP) – After the call for a “national truce” expressed by the president of Peru Dina Boluarte this Tuesday, the “great national march” to Lima took place in parallel, where violent clashes between the security forces and some protesters were again recorded. The situation in the Andean country continues to be critical after five weeks of social unrest that has already left at least 56 dead.

This Tuesday, the so-called “great national march”, whose purpose is to demand the resignation of the Peruvian president Dina Boluarte and the call for elections, ended again in clashes between protesters and the National Police in the center of Lima, the capital.

The mobilization this Tuesday brought together hundreds of people who arrived from different regions of the country after the call, hours before, by the president for a “national truce.” And although it was not as massive as last week, it also recorded episodes of violence.

As reported by the EFE agency, the most violent clashes took place after the march crossed the streets of the historic center of the capital.

The protesters, summoned by multiple social, peasant, union and political organizations, continue in their fight to force Boluarte to resign, close Congress and call early elections. This social outbreak arose after the self-coup by ex-president Pedro Castillo on December 7.

In parallel, the third airport in the country, in the city of Cuzco, suspended its operations again this Tuesday in a preventive manner due to the new escalation of the protests.

“As a preventive measure, (the) Velasco Astete international airport in Cuzco temporarily suspends its operations,” the Ministry of Transport and Communications reported through its Twitter account.

🚨#The last | The #MTC informs that, as a preventive measure, Velasco Astete International Airport of #Cusco, temporarily suspends its operations. This action is carried out to safeguard the integrity of people and the safety of aeronautical operations. pic.twitter.com/iwCfLMYCp6


Five weeks later, the mobilizations in Peru have already left more than 56 fatalities, most of them due to clashes with the Police.

This after Boluarte called for calm under a request for a “national truce.”

“I call on my beloved homeland for a national truce to be able to establish dialogue tables, to be able to set the agenda for each region and develop our towns,” he said, describing the protesters who relaunched the protests as “violent radicals and with their own agenda.” in the southern Andes.

“I am not going to get tired of calling them for dialogue, peace and unity,” said Boluarte in a conference with the foreign press in the morning at the Government Palace in Lima.

Boluarte repeatedly reiterated his “sorry for those who died” in these protests, at least 46 directly related to the demonstrations, which resumed on January 4 in southern Peru and which maintain blockades on the country’s main routes.

In addition, Boluarte once again ruled out his resignation.

“I will leave when we have called the general elections (…) I have no intention of staying in power,” he said emphatically, adding that Congress “without a doubt” will confirm in February the advance of the elections, scheduled for April 2024.

“Would my resignation solve the crisis and the violence? Who would assume the presidency of the Republic?”, he pointed out when asked by the press about his permanence in office.

A hit for convenience

Boluarte emphasized that she occupies the presidency by constitutional mandate and attributed the version that she has given a blow to former President Castillo, to a “narrative of groups of radical people based on drug trafficking, illegal mining and smuggling,” who, according to also maintain they would be behind the violent protests.

“The only truth, gentlemen of the world and of Peru, is that there was a coup on December 7, a failed coup,” he said.

“The way in which Pedro Castillo left is a way of victimizing himself to say that a coup has taken place when he is the author of his own coup, and not leaving due to the pressure of the 57 tax files that he has against him. for acts of corruption,” said Boluarte.

It was convenient for Castillo “to carry out a self-coup to victimize himself and move all this paramilitary apparatus and not respond to the Public Ministry for the acts of corruption for which they are being denounced. There are no victims here, Mr. Castillo, here is a country that is He is bleeding to death as a result of his irresponsibility,” he said.

“With the truth” before the OAS

Boluarte, who will participate online in a session before the Organization of American States (OAS) on Wednesday, said that his intention is to “report the truth.”

“Tomorrow I will appear before the OAS to inform the truth, the Peruvian government and less Dina Boluarte have something to hide, I have always spoken with the truth, looking ahead at my brothers and sisters, there are 50 people killed in these acts of protests , it hurts me, as a woman, mother and daughter, it hurts me,” she said.

According to the Transportation authorities, on Tuesday 85 pickets had blocked the passage on highways in 9 of the 25 Peruvian regions that are calling for Boluarte’s resignation.

In the Ica region, the police used tear gas to unblock several sections of the Panamericana Sur highway that remain closed by dozens of residents.

With AFP and EFE 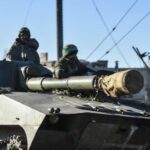