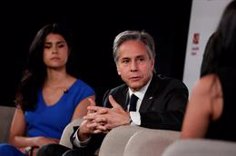 Chinese government authorities have criticized the recent United States report on countries that promote human trafficking and labor exploitation, rejecting its inclusion in it while reminding Washington of its slave-owning past and that of a nation that emerged thanks to labor. forced.

The spokesman for the Chinese Ministry of Foreign Affairs, Wang Wenbin, has pointed out that said report is nothing more than a way for the United States to “ignore the facts” and “deceive the world”, as well as a way to “beautify” itself. the eyes of the international community, collects the newspaper ‘Global Times’.

“No matter how the United States hides it, it cannot erase its slave-trading past. The slave system has been legal in the United States for a third of its 246 years. Between 1514 and 1866, at least 360,000 trafficking expedition teams of slaves traded with millions of blacks to the United States,” the Chinese foreign spokesman recalled.

“No matter how the United States argues, it will not change its crimes from being countries of origin, transit and destination of forced labor,” insisted Wang, who, citing data from the State Department, has highlighted that “in the last five years, Each of the 50 states in the United States and the District of Columbia have reported cases of forced labor and human trafficking.

Wang has pointed out that according to these same figures, it is discovered each year in the United States that some 100,000 are victims of forced labor and has recalled “a heartbreaking case” in Texas in which 50 migrants were found dead in a truck. “Despite that, he is included in level 1. He only disgraces himself,” he has said.

China, like Russia, has been included in level 3 — the lowest — of the 2022 Trafficking in Persons (TIP), which Secretary of State Antony Blinken presented on Tuesday. A list in which there are 22 countries that supposedly “do not do everything possible” to combat human trafficking, forced labor and the presence of child soldiers in their military or security forces.

At this level 3, there are other old acquaintances with whom the United States has not maintained good relations for decades, such as Syria, Cuba, Iran, North Korea, Venezuela, as well as Afghanistan, Burma, the Democratic Republic of the Congo, Nicaragua, Turkmenistan. , Malaysia, or Belarus among others.

FIFA 23: release date and special editions that will go on sale