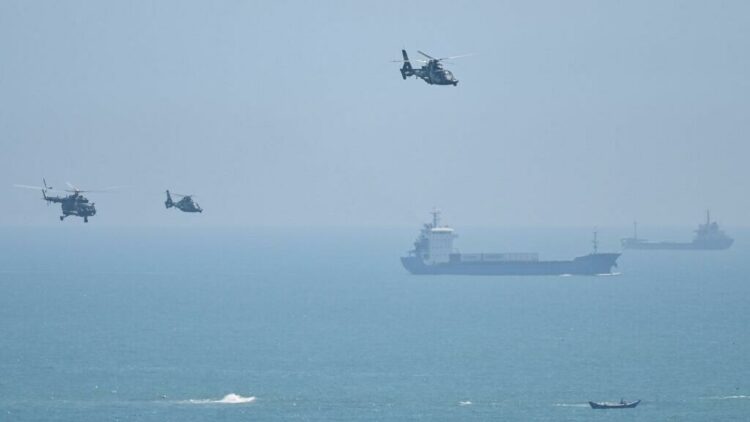 The Chinese military launched the largest military exercises in its history around Taiwan on Thursday, a forceful response to US Congresswoman Nancy Pelosi’s visit to the island. The Chinese military fired “multiple” ballistic missiles into the waters surrounding Taiwan during its main exercises, the Taipei Defense Ministry said, condemning “irrational actions that undermine regional peace.”

Although her trip to the Chinese-claimed territory lasted less than 24 hours, Pelosi unleashed Beijing’s fury by becoming the highest-ranking US official to visit Taipei in 25 years. She insisted that the United States would not abandon the island, which is governed by a democratic regime and lives under the constant threat of invasion by the Chinese army.

In response, Beijing launched large-scale military exercises in six areas around Taiwan at noon Thursday (0400 GMT) along busy trade routes. “The exercises are starting and will continue until Sunday noon (0400 GMT),” Chinese state television CCTV said in a message on social media. “During this period, relevant ships and aircraft must not enter the waters.” and the corresponding airspace”.

“The Ministry of National Defense said that the Chinese Communist Party fired multiple Dongfeng ballistic missiles into the waters surrounding northeast and southwest Taiwan from approximately 1:56 pm (05:56 UTC),” the Taipei Defense Ministry said in a statement. a short statement.

“The Rocket Force of the Eastern Theater Command of the People’s Liberation Army (PLA) launched conventional missiles into designated waters in the east of the island of Taiwan on Thursday,” the Chinese press announced in a tweet.

In Pingtan, a Chinese island near one of the areas where the maneuvers are being carried out, military helicopters flew over the Taiwan Strait, according to Agence France-Presse reporters. Reporters saw several shells, fired near military installations, fly into the sky toward the sea, followed by plumes of white smoke.

The Taiwanese military said it was “preparing for war without looking for it.” According to the Global Times newspaper, citing military analysts, the exercises are “unprecedented” in scale, as the missiles will fly over Taiwan for the first time. “It is the first time that the Chinese military will launch live ammunition and long-range artillery fire over the Taiwan Strait,” said the newspaper, known for its nationalistic tone.

Island authorities have denounced the exercise, saying it threatens the security of East Asia. “Some of the areas of China’s maneuvers encroach […] Taiwan’s territorial waters,” said Sun Li-fang, a spokesman for Taiwan’s Defense Ministry, calling it an “irrational act that defies international order.”

For Beijing, these exercises – as well as others, more limited, started in recent days – are “a necessary and legitimate measure” after Mrs. Pelosi’s visit. “The United States is the provocateur and China is the victim. China is acting in self-defense,” Hua Chunying, a spokeswoman for the Foreign Ministry, told reporters. The exercises are intended to simulate a “blockade” of the island and include “assaulting targets at sea, attacking targets on land and airspace control,” the official China News Agency reported.

Although the hypothesis of an invasion of Taiwan, with a population of 23 million inhabitants, remains unlikely, it has intensified since the election in 2016 of the current president Tsai Ing-wen. Coming from an independence party, Tsai refuses, unlike the previous government, to recognize that the island and the mainland are part of “one China”.